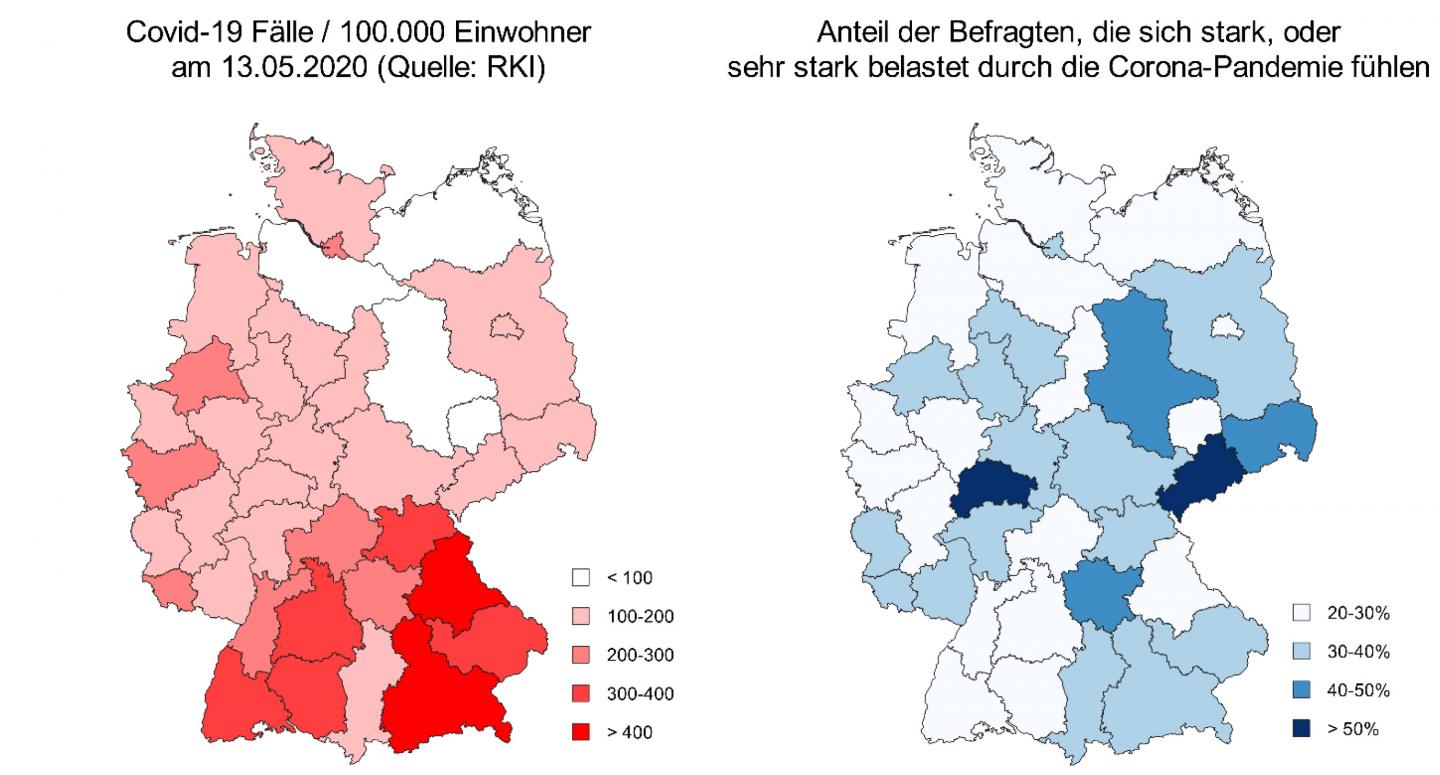 Researchers from the University of Freiburg, Stuttgart and the Ludwig-Maximilians-Universität München conducted an online survey of more than 7,800 people in Germany from May 7-17, 2020 about their experiences and attitudes in the corona pandemic. The results are now being presented by Prof. Dr. Uwe Wagschal, Dr. Sebastian Jäckle, Dr. Eva-Maria Trüdinger and Dr. Achim Hildebrandt. Almost every German is affected by the pandemic in some way. Only five percent of those surveyed do not feel affected by the restrictions and measures. In contrast, every third respondent feels strongly or even very strongly affected, women more strongly than men overall. Younger and older people, however, feel less burdened by the pandemic than people between 30 and 60.

The perceived strain in individual regions of Germany varies greatly, the researchers report. The respondents feel a particularly heavy strain in the regions of Chemnitz and Gießen, but also in Central Franconia, Saxony-Anhalt and the Dresden region. Compared to the official case numbers of the German public health advisory body, the Robert Koch Institute (RKI), in the regions, however, there is no strong correlation between the number of infected persons and the perceived strain. People in northern Germany in particular are more relaxed, but even in the most affected areas in Bavaria and Baden-Württemberg, the respondents tend to feel less strained, despite high infection rates and deaths in the south.

In addition to the perceived stress, there is also fear of impairment. The fear of one’s own illness or that of people close to one is the strongest. For just under 40 percent of those surveyed, this is the greatest fear, in addition to the fear of a slump in the economy and of having to restrict their lifestyle. On the other hand, the respondents are much less afraid of isolation and their own unemployment. “Obviously, the danger of one’s own unemployment is assessed less dramatically than the overall economic consequences,” explains Wagschal. “Overall, however, there is a high level of confidence in the health measures of the federal and state governments,” says the Freiburg political scientist. More than 60 percent of those surveyed consider them suitable for dealing with the health consequences of the pandemic. The interviewees are considerably more skeptical as to whether the political measures taken are suitable for dealing with the economic consequences of the pandemic. Only just under 35 percent of those surveyed are convinced of it.

A majority of the almost 7,800 people surveyed have a clear idea of who should pay for the costs of the pandemic: 51 percent think that a wealth tax is very sensible for the rich, while a further 30 percent think it is partly sensible. In contrast, only just under 3 percent consider general tax increases to be very sensible. The idea of reintroducing the solidarity surcharge is considered very sensible by only around 15 percent of those surveyed.

“Overall, a clear majority of 59.9 percent of those surveyed do not consider the government measures to combat the virus to be excessive,” Wagschal emphasizes, “but there are clear differences between the supporters of the parties. More than half of the FDP supporters and almost three quarters of the AfD supporters consider the measures to be exaggerated, but less than 15 percent of the supporters of the CDU/CSU, the Greens and the SPD.” However, the generally approving majority also takes a differentiated view of the measures. It agrees with protective measures such as increasing social distance, sealing off affected communities or closing the borders. The public is much more critical of measures such as monitoring telecommunications data electronically or restricting parliamentary rights.

When asked about their sources of information with regard to corona reporting, there are clear differences between the supporters of the individual parties. Supporters for the CDU/CSU, the SPD and the Green Party all have a great deal of trust in the official websites such as that of the Ministry of Health or the RKI as well as the established, public media and newspapers. The supporters of the Left and especially the FDP consistently show a lower level of trust here. AfD supporters and the supporters of other parties, including respondents who indicated the new grouping “Resistance 2020” as their electoral preference, deviate significantly from the rest of the population. They consider all sources of information to be rather untrustworthy on average and are most likely to find information on internet blogs, YouTube and social networks, precisely those sources in which the rest of the population has the least confidence.