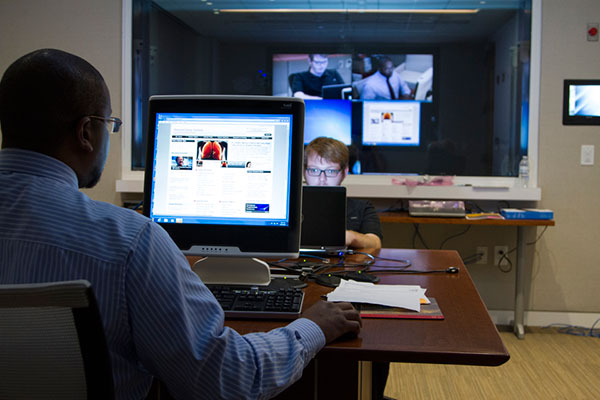 When reading words on a screen, the human brain comprehends words placed on the right side of the screen faster. The total amount of presented information on the screen also affects the speed and accuracy of the brain’s ability to process words. These are the findings of HSE University researchers Elena Gorbunova and Maria Falikman presented in an article that was published in the journal, Advances in Cognitive Psychology.

The study, which was carried out at the Laboratory for the Cognitive Psychology of Digital Interface Users, allowed the researchers to determine how the speed and accuracy of the human brain’s ability to process words on a screen depend on the words’ placement and quantity. This is due to the fact that cognitive functions are divided between the hemispheres of the brain. In this case, information received from the left field of vision – the left side of a screen – is received by the brain’s right hemisphere, while an image in the right field of vision is received by the left hemisphere.

In a series of experiments, the HSE researchers used a visual search method. First, subjects were shown a target letter that they would subsequently be required to find. Then a word or a random set of letters was shown on the left or right side of a screen, or two stimuli were shown on both sides of the screen simultaneously. The participants’ task was to locate the target letter as quickly as possible and press a specified key on the console. The reaction time and accuracy of their answers made it possible to determine in which visual hemifield information of various types is processed faster.

The results showed that the left and right hemispheres are characterized by different word processing strategies. When a familiar word appeared on the screen, the left hemisphere of the right-handed participants processed it holistically and found the target letter faster, while the right hemisphere was engaged in a slower search, ‘checking’ each letter in sequence. When participants were presented a meaningless set of letters, the opposite effect was observed: the left hemisphere processed the letter sets letter by letter, and the right processed them quickly and holistically.

Thus, words placed on the right of the screen were processed faster. Moreover, the word processing strategy the brain chooses depends on the total amount of information presented on the screen.

This and other laboratory studies build upon earlier discoveries in the field of usability. When developing interfaces, sites, and applications, experts advise taking factors of cognitive information processing into consideration. These factors include:

Scientists note that research in this area is useful not only for creating convenient interfaces, but also for understanding the nature of dyslexia and other reading disabilities, as well as for developing online courses and game projects.

Sleeping Too Much -- or Too Little -- Boosts Heart Attack Risk