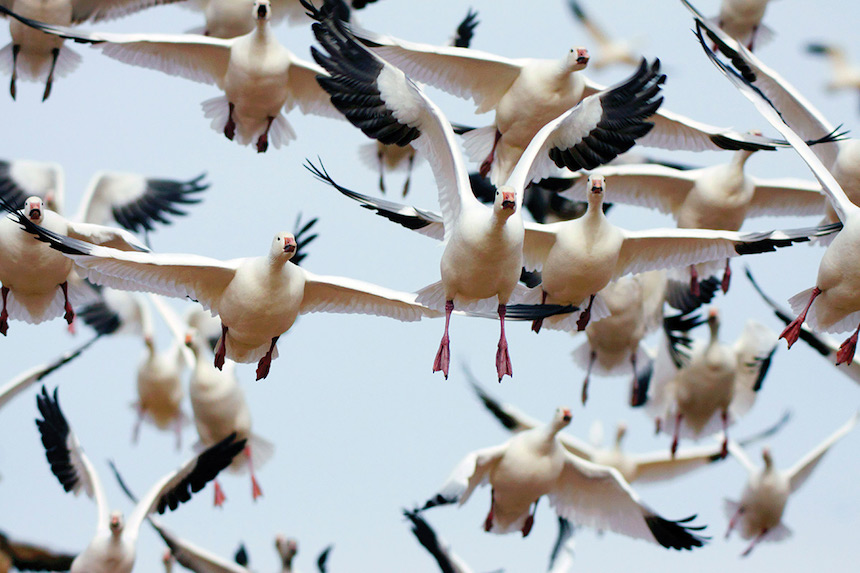 Have you ever got on a flight and the person next to you started sneezing? With 37 million scheduled flights transporting people around the world each year, you might think that the viruses and other germs carried by travellers would be getting a free ride to new pastures, infecting people as they go.

Yet pathogenic microbes are surprisingly bad at expanding their range by hitching rides on planes. Microbes find it difficult to thrive when taken out of their ecological comfort zone; Bali might just be a tad too hot for a Tasmanian parasite to handle.

But humans aren’t the only species to go global with their parasites. Billions of animals have been flying, swimming and running around the globe every year on their seasonal migrations, long before the age of the aeroplane. The question is, are they picking up new pathogens on their journeys? And if they are, are they transporting them across the world?

Migratory animals are the usual suspects for disease spread

With the rate of zoonotic diseases (pathogens that jump from animals to humans) on the rise, migratory animals have been under increasing suspicion of aiding the spread of devastating diseases such as bird flu, Lyme disease, and even Ebola.

These suspicions are bad for migrating animals, because they are often killed in large numbers when considered a disease threat. They are also bad for humans, because blaming animals may obscure other important factors in disease spread, such as animal trade. So what’s going on?

Despite the logical link between animal migration and the spread of their pathogens, there is in fact surprisingly little direct evidence that migrants frequently spread pathogens long distances.

This is because migratory animals are notoriously hard for scientists to track. Their movements make them difficult to test for infections over the vast areas that they occupy.

But other theories exist that explain the lack of direct evidence for migrants spreading pathogens. One is that, unlike humans who just have to jump on a plane, migratory animals must work exceptionally hard to travel. Flying from Australia to Siberia is no easy feat for a tiny migratory bird, nor is swimming between the poles for giant whales. Human athletes are less likely to finish a race if battling infections, and likewise, migrant animals may have to be at the peak of health if they are to survive such gruelling journeys. Sick travellers may succumb to infection before they, or their parasitic hitchhikers, reach their final destination.

Put simply, if a sick animal can’t migrate, then neither can its parasites.

On the other hand, migrants have been doing this for millennia. It is possible they have adapted to such challenges, keeping pace in the evolutionary arms race against pathogens and able to migrate even while infected. In this case, pathogens may be more successful at spreading around the world on the backs of their hosts. But which theory does the evidence support?

To try and get to the bottom of this question, we identified as many studies testing this hypothesis as we could, extracted their data, and combined them to look for any overarching patterns.

We found that infected migrants across species definitely felt the cost of being sick: they tended to be in poorer condition, didn’t travel as far, migrated later, and had lower chances of survival. However, infection affected these traits differently. Movement was hit hardest by infection, but survival was only weakly impacted. Infected migrants may not die as they migrate, but perhaps they restrict long-distance movements to save energy.

So pathogens seem to pose some costs on their migratory hosts, which would reduce the chances of migrants spreading pathogens, but perhaps not enough of a cost to eliminate the risk completely.

But an important piece of the puzzle is still missing. In humans, travelling increases our risk of getting ill because we come into contact with new germs that our immune system has never encountered before. Are migrants also more susceptible to unfamiliar microbes as they travel to new locations, or have they adapted to this as well?

To investigate the susceptibility of migrants, we went in a different direction and decided to look at the gut bacteria of migratory shorebirds – grey, unassuming birds that forage on beaches or near water, and that undergo some of the longest and fastest migrations in the animal kingdom.

Most animals have hundreds of bacterial species living in their guts, which help break down nutrients and fight off potential pathogens. Every new microbe you ingest can only colonise your gut if the environmental conditions are to its liking, and competition with current residents isn’t too high. In some cases, it may thrive so much it becomes an infection. 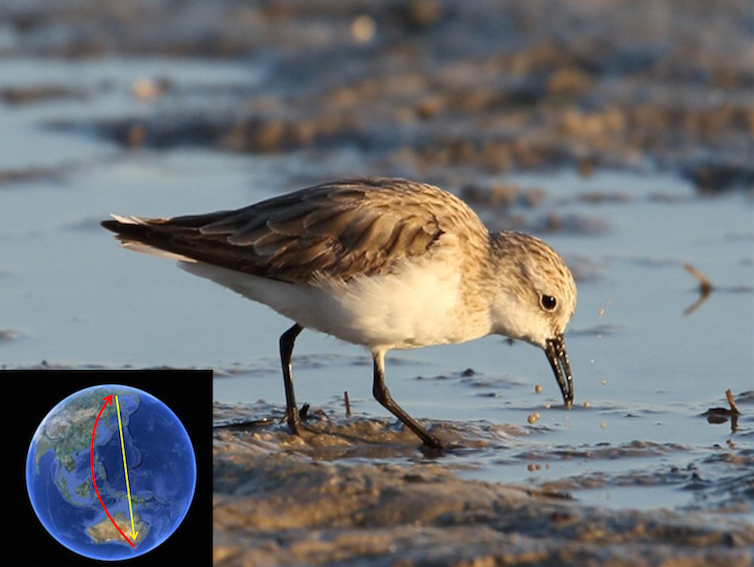 The Red-necked stint is highly exposed to sediment microbes as it forages for the microscopic invertebrates that fuel its vast migrations.

We found the migratory shorebirds we studied were exceptionally good at resisting invasion from ingested microbes, even after flying thousands of kilometres and putting their gut under extreme physiological strain. Birds that had just returned from migration (during which they stopped in many places in China, Japan, and South East Asia), didn’t carry any more species of bacteria than those that had stayed around the same location for a year.

Although these results need to be tested in other migratory species, our research suggests that, like human air traffic, pathogens might not get such an easy ride on their migratory hosts as we might assume. There is no doubt that migrants are involved in pathogen dispersal to some degree, but there is increasing evidence that we shouldn’t jump the gun when it comes to blaming migrants.