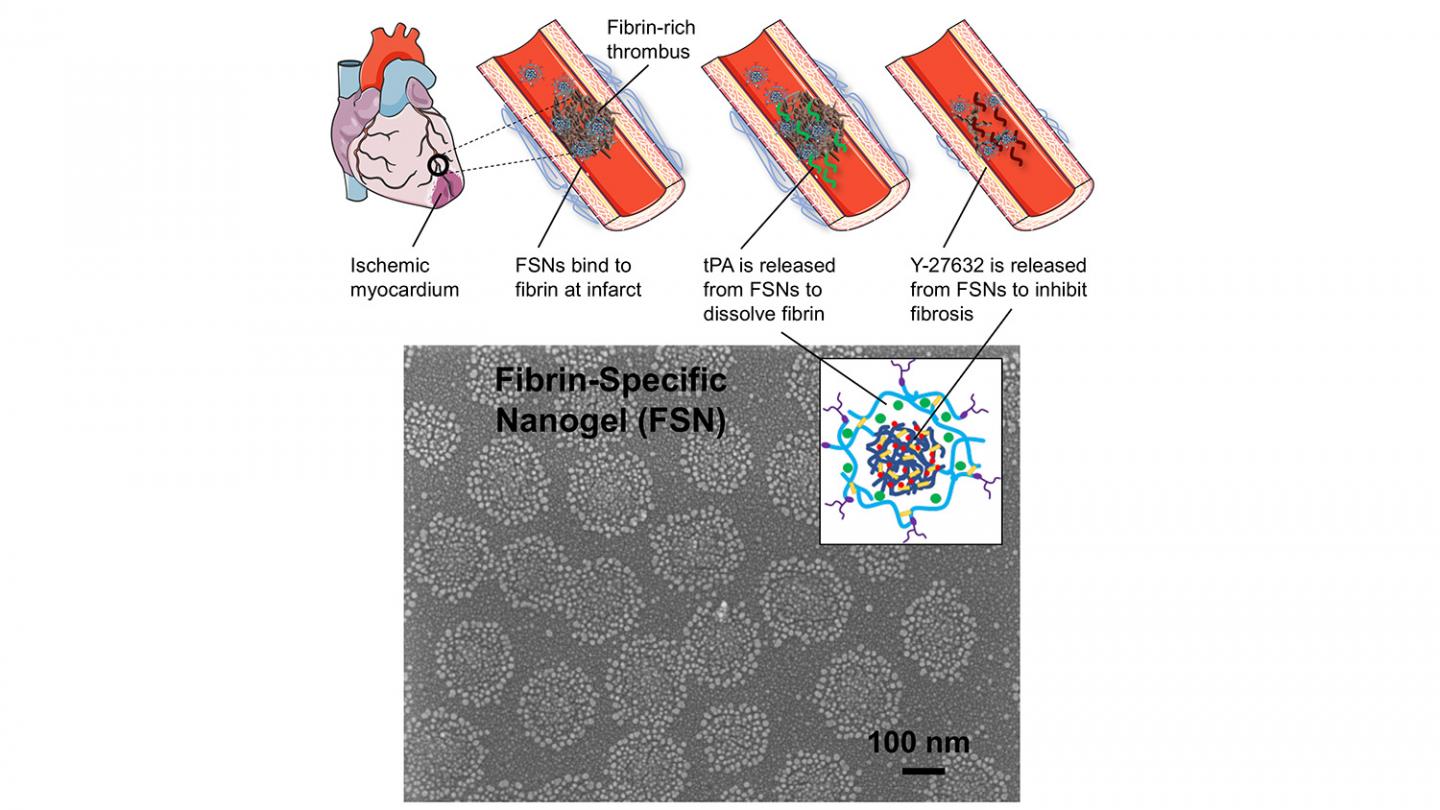 Researchers from North Carolina State University and the University of North Carolina at Chapel Hill have developed a drug-delivery system that allows rapid response to heart attacks without surgical intervention. In laboratory and animal testing, the system proved to be effective at dissolving clots, limiting long-term scarring to heart tissue and preserving more of the heart’s normal function.

“Our approach would allow health-care providers to begin treating heart attacks before a patient reaches a surgical suite, hopefully improving patient outcomes,” says Ashley Brown, corresponding author of a paper on the work and an assistant professor in the Joint Biomedical Engineering Program (BME) at NC State and UNC. “And because we are able to target the blockage, we are able to use powerful drugs that may pose threats to other parts of the body; the targeting reduces the risk of unintended harms.”

Heart attacks, or myocardial infarctions, occur when a thrombus – or clot – blocks a blood vessel in the heart. In order to treat heart attacks, doctors often perform surgery to introduce a catheter to the blood vessel, allowing them to physically break up or remove the thrombus. But not all patients have quick access to surgical care.

And more damage can occur even after the blockage has been removed. That’s because the return of fresh blood to tissues that had been blocked off can cause damage of its own, called reperfusion injury. Reperfusion injury can cause scarring, stiffening cardiac tissue and limiting the heart’s normal functionality.

To address these problems, researchers have developed a solution that relies on porous nanogel spheres, about 250 nanometers in diameter, which target a thrombus and deliver a cocktail of two drugs: tPA and Y-27632.

A thrombus can be made of various substances, such as platelets or arterial plaques, but they all contain a substance called fibrin. So, to target blockages, each nanogel is coated with proteins that bind specifically to fibrin. In other words, when the nanogels reach a thrombus, they stick.

The tPA and Y-27632 are layered inside the nanosphere, with the tPA forming a shell that surrounds the Y-27632. As a result, the tPA leaks out first at the thrombus site, allowing it to do its job – which is to break down fibrin and dissolve the clot.

As the tPA is released, the Y-27632 escapes the nanogel. While the tPA targets the clot itself, the Y-27632 aims to limit the damage caused by reperfusion injury. It does this by limiting the rigidity of the cells in the area that contribute to scarring. This allows these cells to retain more of their plasticity, improving their ability to function normally and preserving more cardiac function.

In in vitro testing, the researchers found that the targeted tPA/Y-27632 cocktail dissolved clots in a matter of minutes. While this has yet to be tested in trials, it may work more quickly than surgical interventions, which require time to prep the patient and get the catheter in place.

In tests using laboratory rats, the researchers also found that their technique limited scarring and preserved heart function after heart attack better than targeted tPA or Y-27632 by themselves – and far better than a control group in which animals received neither drug.

Specifically, animals that received the targeted cocktail had a left ventricular ejection fraction, which measures a heart’s functionality, of around 67 percent four weeks after the heart attack – which is healthy. The tPA by itself was around 57 percent, which is at the low end of the normal range, while both the control group and Y-27632 by itself dipped into the 40s. Similarly, the targeted cocktail resulted in scar tissue across less than 5 percent of the affected area. The tPA and Y-27632 had scar tissue across approximately 7 percent of the area, with the control group seeing scarring across more than 10 percent.

What’s more, the researchers found that the targeted nanogels resulted in little or none of the nanogels being found in other tissues – such as the lungs and liver – particularly when compared to the use of the non-targeted nanogels.

“This is an important part of our findings, because tPA and Y-27632 can both pose risks if they begin acting on parts of the body outside of the targeted area,” Brown says. “For example, tPA can cause bleeding and Y-27632 can affect many tissues where cell contraction is needed for normal function.”

One other benefit of the targeted nanogels is that, due to their small size, they can target even those blood vessels that are too small to reach using catheters.

The researchers also note that this is a preclinical study. Next steps for the work include further evaluating the safety of the nanogels and testing in larger animal models.

“While we are still in the early stages of developing this technology, we know that it’s important to acknowledge issues related to cost,” Brown says. “Given the complexity of the drug delivery system, it should be comparable to or slightly more expensive than recombinant protein therapeutics currently in clinical use – such as tPA by itself. However, because the drugs are targeted, the doses are likely to be smaller. That should help to keep the costs comparable to existing drugs on the market.”

If You're a Woman Having a Heart Attack, Insist on a Female Physician, Study Claims