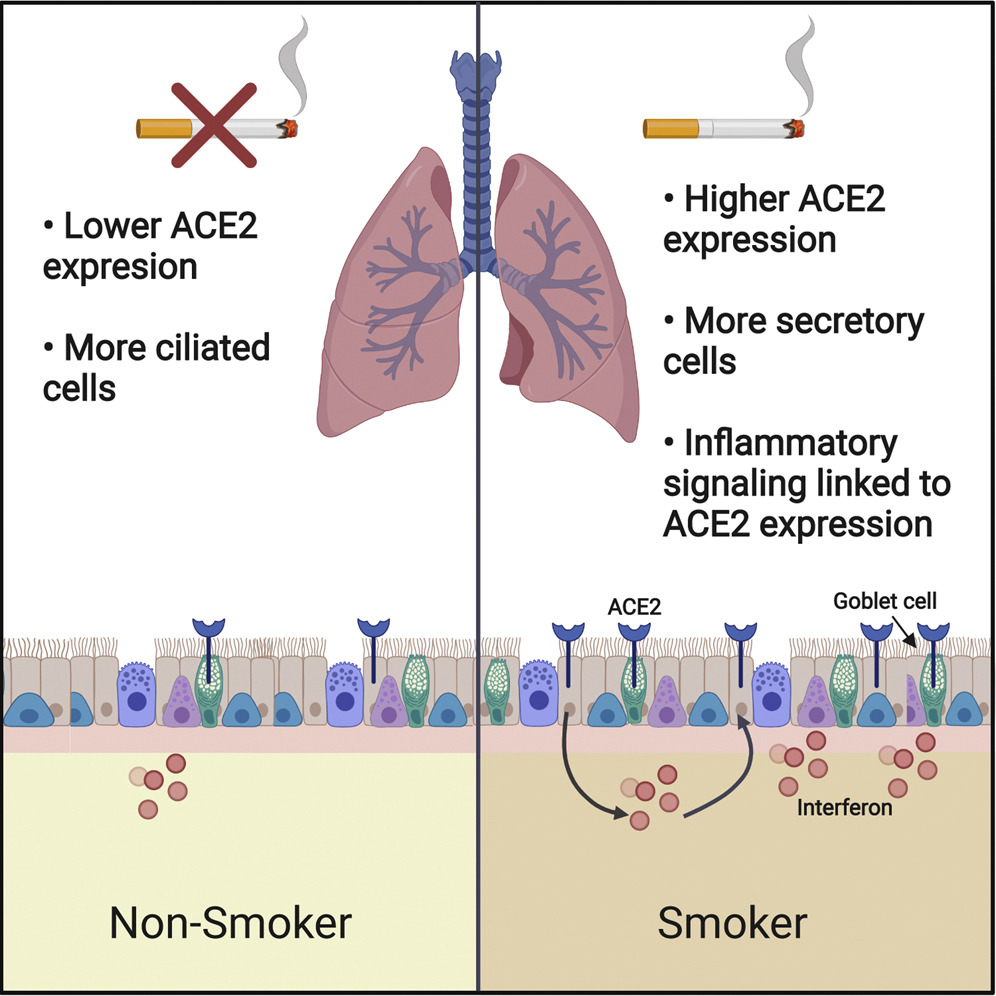 Previous data from COVID-19 patients suggests that cigarette smokers are more likely to have health complications. One possible reason, researchers report in the journal Developmental Cell, is that smoking increases the gene expression of ACE2–the protein that binds SARS-CoV-2–which may promote COVID-19 infection. The study suggests that prolonged smoking could cause an increase of the ACE2 protein in the lungs, possibly resulting in a higher rate of morbidity in patients.

“Our results provide a clue as to why smokers who develop COVID-19 tend to have poor clinical outcomes,” says senior author Jason Sheltzer (@JSheltzer), a cancer geneticist at Cold Spring Harbor Laboratory. “We found that smoking caused a significant increase in the expression of ACE2, the protein that SARS-CoV-2 uses to enter human cells.”

ACE2, or Angiotensin Converting Enzyme 2, is a regulatory protein that has been linked to vulnerability to the 2003 SARS (2003) virus. “Evidence from mouse experiments has shown that higher levels of ACE2 make mice more susceptible to SARS,” says Sheltzer. More recent work with SARS-CoV-2 found that when human ACE2 was highly expressed in mice infected with COVID-19, they died more quickly.”

In humans, the lungs act as one of the primary locations of ACE2 production. To assess the direct impact of smoking on ACE2 expression in the lungs, Sheltzer compared ACE2 gene expression from the lung epithelial tissue of people who smoked cigarettes regularly to those who had never smoked. “We found that smoking caused a significant increase in the expression of ACE2,” says Sheltzer, who noted that smokers produced 30%-55% more ACE2 than their non-smoking counterparts. This change was also dose dependent, with heavy smokers having the greatest ACE2 values.

The effects of smoking on ACE2 may be tied to the goblet cells in the lungs–one of the few lung cell types that Sheltzer found to actively express the ACE2 gene. “Goblet cells produce mucous to protect the respiratory tract from inhaled irritants. Thus, the increased expression of ACE2 in smokers’ lungs could be a byproduct of smoking-induced secretory cell hyperplasia” says Sheltzer. An uptick in ACE2 was also associated with the inflammatory pulmonary diseases COPD and idiopathic pulmonary fibrosis.

Additionally, Sheltzer’s results indicate that other viral infections, such as influenza, as well as interferon signaling–the part of the body’s virus defense system–increase ACE2 expression. “Because of this, it’s conceivable that SARS-CoV-2 could trigger the upregulation of its own receptor, thereby creating a positive feedback loop leading to more infections,” Sheltzer says.

While the impact of cigarette smoke and ACE2 expression is compelling, it is not permanent. By comparing the lungs of current smokers to those who quit smoking for at least 12 months, Sheltzer found “a significant decrease in ACE2 expression, demonstrating that the effects of smoking on ACE2 can be reversed.” Further, other studies on the effects of cigarette smoke have shown mixed results. “Cigarette smoke contains hundreds of different chemicals. It’s possible that certain ingredients (like nicotine) have a different effect than whole smoke does,” says Sheltzer.

And while Sheltzer finds strong support for the upregulation of ACE2 gene expression from smoking, the actual ACE2 protein may be regulated in ways not addressed in this study. “One could imagine that having more cells that express ACE2 could make it easier for SARS-CoV-2 to spread in someone’s lungs, but there is still a lot more we need to explore.”