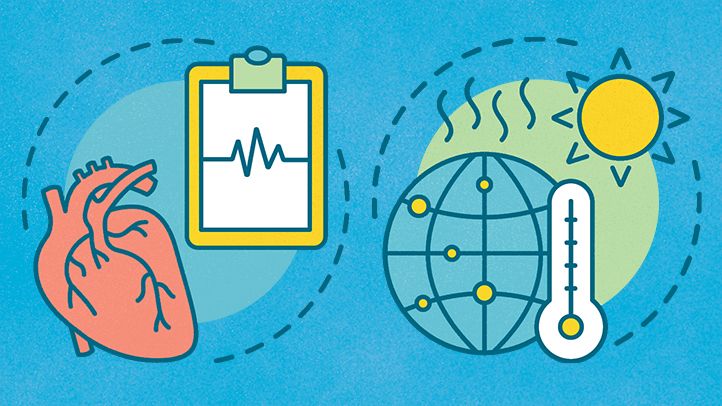 Extreme heat accounted for about 600-700 additional deaths from cardiovascular disease annually over a decade-long period in the U.S., according to a study presented at the American College of Cardiology’s 71st Annual Scientific Session. The spike in deaths during heat waves was most pronounced in men and non-Hispanic Black adults, suggesting climate change may exacerbate existing heart disease disparities for these groups in the coming years.

Extreme heat events are on the rise in the U.S., which now sees about three times as many heat waves per year compared to the 1960s due to climate change. Heat can cause increased strain on the heart and trigger events such as heart attacks. In addition, some heart disease risk factors, such as diabetes—as well as heart medications, such as diuretics and beta blockers—can affect a person’s ability to regulate their body temperature and make it difficult to handle extreme heat. This study is the first to assess trends in heart disease deaths during extreme heat events on a nationwide scale. The researchers said previously reported studies that focused on specific cities or relied on heat being listed as an official cause of death likely underestimate the true toll of these events.

“These results suggest the full extent of the adverse health effects of extreme heat is broader than previously realized,” said Sameed Ahmed Khatana, MD, assistant professor of medicine at the University of Pennsylvania and the study’s lead author. “Climate change and its consequences will have a very large impact on our society in terms of health, and cardiovascular health is an important component of that.”

The researchers analyzed temperature trends and cardiovascular mortality in all 3,108 counties in the contiguous U.S. Using data from the Centers for Disease Control and Prevention National Environmental Health Tracking Network, each county’s baseline average daily maximum temperature was calculated based on temperature records from 1979-2007. The researchers then identified extreme heat days that occurred in the decade from 2008-2017, defined as days when the heat index reached 90 F or higher, and the maximum heat index was in the 99th percentile of the daily maximum heat index in the baseline period for that day. Data from the National Center for Health Statistics was used to assess trends in cardiovascular mortality for the same decade.

“We were surprised by the significant heterogeneity across racial subgroups and across genders,” Khatana said. “Extreme heat has an important effect on cardiovascular mortality across the country; however, that effect is being felt disproportionately in different populations.”

Researchers said several factors may contribute to these disparities. For example, the higher proportion of men working in sectors where it can be harder to avoid sustained heat exposure, such as construction and agriculture, could account for some of the difference between genders. The higher risk among Black populations could be related to systemic health disparities and to differences in the built environment—such as less access to air conditioning and heat-protective tree cover—that have resulted from a history of segregation and discrimination in predominately Black neighborhoods.

Khatana said clinicians, city planners and leaders need to recognize the growing health toll of extreme heat and work to prepare hospitals for heat-related surges by providing access to cooling centers and better protecting vulnerable populations, such as the elderly. Modifications to the built environment, such as planting more trees in urban areas, can also help to reduce the impact of heat waves.

“Policy leaders also need to realize that climate negotiations have a real impact on people’s health here in the U.S. and in their own communities,” Khatana said. “The health impacts of climate change have been happening for a while and are likely to continue to get worse with rising temperatures.”

Khatana will present the study, “Association of Extreme Heat and Cardiovascular Mortality in the United States – A County Level Longitudinal Analysis from 2008 to 2017,” virtually on Saturday, April 2, at 8:30 a.m. ET

Menstrual Equity and the Pandemic: Study Shows It’s Time to Take the Gendered Experience into Account