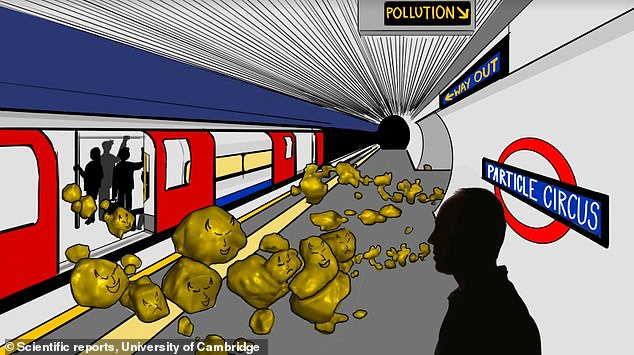 The London Underground is polluted with ultrafine metallic particles small enough to end up in the human bloodstream, according to University of Cambridge researchers. These particles are so small that they are likely being underestimated in surveys of pollution in the world’s oldest metro system.

The team found that the samples contained high levels of a type of iron oxide called maghemite. Since it takes time for iron to oxidise into maghemite, the results suggest that pollution particles are suspended for long periods, due to poor ventilation throughout the Underground, particularly on station platforms.

Some of the particles are as small as five nanometres in diameter: small enough to be inhaled and end up in the bloodstream, but too small to be captured by typical methods of pollution monitoring. However, it is not clear whether these particles pose a health risk.

Other studies have looked at overall pollution levels on the Underground and the associated health risks, but this is the first time that the size and type of particles has been analysed in detail. The researchers suggest that periodic removal of dust from Underground tunnels, as well as magnetic monitoring of pollution levels, could improve air quality throughout the network. Their results are reported in the journal Scientific Reports.

The London Underground carries five million passengers per day. Multiple studies have shown that air pollution levels on the Underground are higher than those in London more broadly, and beyond the World Health Organization’s (WHO) defined limits. Earlier studies have also suggested that most of the particulate matter on the Underground is generated as the wheels, tracks and brakes grind against one another, throwing up tiny, iron-rich particles.

“Since most of these air pollution particles are metallic, the Underground is an ideal place to test whether magnetism can be an effective way to monitor pollution,” said Professor Richard Harrison from Cambridge’s Department of Earth Sciences, the paper’s senior author. “Normally, we study magnetism as it relates to planets, but we decided to explore how those techniques could be applied to different areas, including air pollution.”

Pollution levels are normally monitored using standard air filters, but these cannot capture ultrafine particles, and they do not detect what kinds of particles are contained within the particulate matter.

“I started studying environmental magnetism as part of my PhD, looking at whether low-cost monitoring techniques could be used to characterise pollution levels and sources,” said lead author Hassan Sheikh from Cambridge’s Department of Earth Sciences. “The Underground is a well-defined micro-environment, so it’s an ideal place to do this type of study.”

Working with colleagues from Cambridge’s Department of Materials Science and Metallurgy, Sheikh and Harrison analysed 39 dust samples from the London Underground, provided by Transport for London (TfL). The samples were collected in 2019 and 2021 from platforms, ticket halls, and train operator cabins on the Piccadilly, Northern, Central, Bakerloo, Victoria, Northern, District and Jubilee lines. The sampling included major stations such as King’s Cross St Pancras, Paddington, and Oxford Circus.

The researchers used magnetic fingerprinting, 3D imaging and nanoscale microscopy to characterise the structure, size, shape, composition and magnetic properties of particles contained in the samples. Earlier studies have shown that 50% of the pollution particles in the Underground are iron-rich, but the Cambridge team were able to look in much closer detail. They found a high abundance of maghemite particles, ranging in diameter from five to 500 nanometres, and with an average diameter of 10 nanometres. Some particles formed larger clusters with diameters between 100 and 2,000 nanometres.

“The abundance of these very fine particles was surprising,” said Sheikh. “The magnetic properties of iron oxides fundamentally change as the particle size changes. In addition, the size range where those changes happen is the same as where air pollution becomes a health risk.”

While the researchers did not look at whether these maghemite particles pose a direct health risk, they say that their characterisation methods could be useful in future studies.

“If you’re going to answer the question of whether these particles are bad for your health, you first need to know what the particles are made of and what their properties are,” said Sheikh.

“Our techniques give a much more refined picture of pollution in the Underground,” said Harrison. “We can measure particles that are small enough to be inhaled and enter the bloodstream. Typical pollution monitoring doesn’t give you a good picture of the very small stuff.”

The researchers say that due to poor ventilation in the Underground, iron-rich dust can be resuspended in the air when trains arrive at platforms, making the air quality on platforms worse than in ticket halls or in operator cabins.

Given the magnetic nature of the resuspended dust, the researchers suggest that an efficient removal system might be magnetic filters in ventilation, cleaning of the tracks and tunnel walls, or placing screen doors between platforms and trains.

Killing Pancreatic Cancer with T Cells That Supercharge Themselves