Scientists uncovered a high-resolution map of the wiring inside the mouse brain’s thirst center. With these blueprints, they could trick mice into becoming light or heavy water drinkers. Moreover, they discovered a quenching circuit that knew when to tell the brain, “Stop, the body has had enough.” Supported, in part, by the NIH’s Brain Research through Advancing Innovative Technologies (BRAIN) Initiative, the results may also provide a glimpse into the rules that govern how the brains circuits work.

“Bodily fluids are maintained by a delicate and tightly regulated balance of thirst and satiety. We genetically mapped out the neuronal circuits that tell the body when to drink,” said Yuki Oka, Ph.D., California Institute of Technology and senior author of the study published in Nature.

His group studied the circuits of the lamina terminalis, the thirst center located deep inside the brain. For decades, scientists knew that three groups of neurons in this area cooperated to control drinking, and they even had clues as to which type of neurons did so. But no one had a genetically defined circuit diagram for how they did it. Nor did they completely understand how the cells tell the body to stop drinking well before the stomach fully absorbs water and other fluids.

Using genes designed to help scientists dissect brain circuits, the researchers of this study found that opposing lines of communications running through an area of the lamina terminalis called the median preoptic nucleus (MnPO) may be critical players. One line was essentially responsible for telling the mice to drink while the other line told them when to stop. Both seemed to work in sequential order, relaying drinking or quenching messages from one neuron to another. Use of the mapping tools was supported by NIH’s BRAINInitiative.

“A goal of the BRAIN Initiative is to arm scientists with 21st century tools so they can fully understand how the healthy and diseased brain works at a level never seen before,” said Dr. Walter J. Koroshetz, M.D., director at the NIH’s National Institute of Neurological Disorders and Stroke (NINDS). “This study is a good example how, after only a few years, the public’s investment in the BRAIN Initiative is paying off and helping researchers solve some of the mysteries of the brain.” 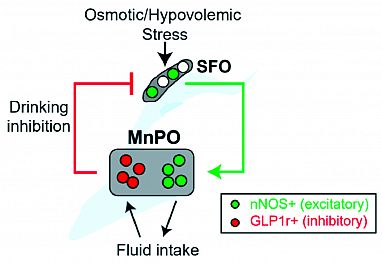 Previously, Dr. Oka and his colleagues had shown that activation of neurons in an area of the lamina terminalis called the subfornical organ (SFO) may trigger drinking in response to dehydration. The neurons could be identified by the fact that they send excitatory, or stimulating, signals to other cells and were marked by genes called ETV1 and nitric oxide synthase (NOS). In this study, his team found that drinking may happen when the same type of neurons in the MnPO relay drink messages from the subfornical organ NOS neurons out of the lamina terminalis to other parts of the brain.

Although activation of NOS neurons in any of the three areas triggered drinking in mice, further experiments suggested that the thirst impulse required the presence of NOS neurons from the median preoptic nucleus. Genetically killing those neurons prevented the researchers from inducing drinking when they activated NOS neurons in the SFO and greatly reduced the chance they could induce drinking by stimulating neurons in the OVLT.

In a separate set of experiments, Dr. Oka’s team showed that mice may stop drinking when a different type of neuron in the median preoptic nucleus sends inhibitory, or quieting, signals to NOS neurons in the subfornical organ. The neurons were marked by a gene called glucagon-like-peptide-1 (GLP1R).

The researchers almost completely prevented dehydrated mice from drinking when they activated the GLP1R neurons in the median preoptic nucleus. In contrast, when the researchers genetically silenced the neurons, the dehydrated mice drank a saline solution more than normal. Tracing experiments and electrical recordings confirmed that these neurons sent inhibitory signals to NOS neurons in the subfornical organ via their axons, the part of the neuron that traditionally sends messages to others.

Finally, Dr. Oka’s team investigated how the GLP1R neurons in the median preoptic nucleus knew when to stop drinking. Their results showed that the neurons fired only when the mice drank fluids, including saline, sugar water, and oil, but not when the mice licked a dry water spout or ate a watery gel. This suggested that both the ingestion of fluids and the act of gulping were required to activate the neurons.

“Our results shed light on a new aspect of appetite regulation. It appears that the act of drinking itself sends satiety signals to the brain and these neurons act like fluid flow-meters that tell the brain when the body has had enough to drink,” said Dr. Oka. “This circuit may be the reason why the brain knows to stop drinking well before the gut has fully absorbed all the water the animal drinks.”

In the future, Dr. Oka plans to continue using genetic tools to dissect other circuits that are involved with drinking and thirst including those that appear to connect to the median preoptic nucleus neurons described in this study.