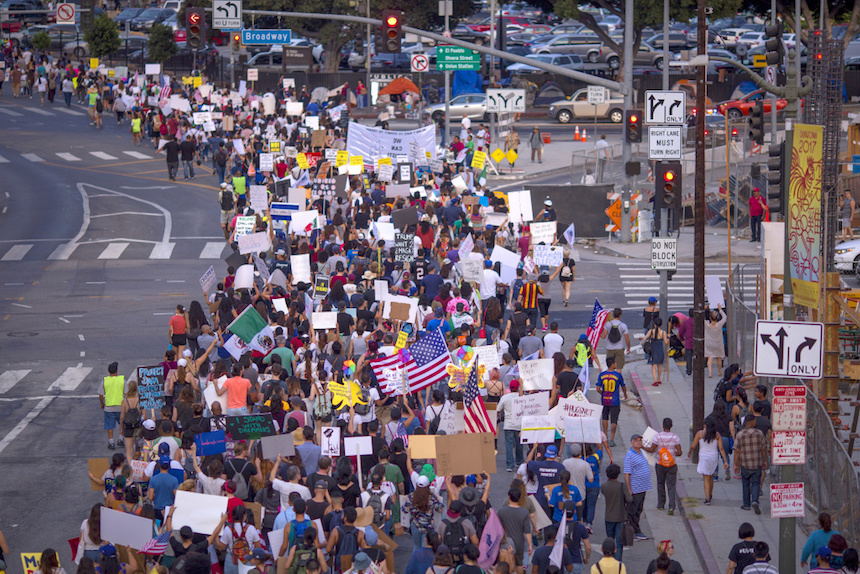 Earlier this month, US President Donald Trump announced his plan to end the Deferred Action for Childhood Arrivals (DACA) program and gave the Congress 6 months to act. His decision is not only unthinkably cruel, it is also ill-informed.

The DACA programme was established in 2012 under Barack Obama’s Presidency to provide young undocumented immigrants, who arrived in the USA as children, temporary and renewable work permits, together with freedom from deportation. Individuals have to meet a series of stringent eligibility criteria—including arrival in the USA younger than 16 years, living in the country since 2007, being younger than 31 years in 2012, and being at school or having completed high school education. 800 000 individuals, mainly Hispanics from Mexico, Guatemala, El Salvador, and Honduras, have been enrolled in the programme. Data on the benefits of such policy for individuals and for the society are accumulating.

In their study published in the April issue of The Lancet Public Health, Venkataramani and colleagues assessed the health consequences of DACA and showed that the programme has substantially improved the mental health of eligible individuals. In a quasi-experimental study they drew a sample of non-citizen Hispanic individuals (the main beneficiaries of the programme) from a large national survey. Those who met DACA eligibility criteria were deemed to have been exposed to the policy, whereas those who were otherwise similar but not eligible formed a comparison group. DACA-eligible individuals experienced a reduction in psychological distress compared with DACA-ineligible individuals, and were less likely to meet screening criteria for moderate or worse psychological distress. The findings of the study not only add to a growing body of evidence showing strong links between immigration policy choices and health outcomes, but also suggest that mental health should be taken into account when considering policy alternatives.

In a study published in Science, Hainmueller and colleagues used Medicaid claims data to compare the mental health of children of DACA-eligible mothers versus non-eligible mothers. They report that mothers’ DACA eligibility was associated with substantial decreased anxiety disorder diagnoses in their children. Parents’ unauthorised status can perpetuate health inequalities through the intergenerational transmission of disadvantage. As the authors note, “Protecting unauthorised immigrants from deportation led to immediate and sizeable improvements in the mental health of their US citizen children.” They suggest that expanding DACA, “could further promote the health and wellbeing of this next generation of American citizens.”

Protecting undocumented immigrants can improve their mental health and that of their children. “Rescinding DACA therefore represents a threat to public mental health” wrote Venkataramani and Tsai in The New England Journal of Medicine, “it is a humanitarian imperative for health care providers and public health officials to take an active role in countering that threat.”

There is also an economic argument. DACA has been shown to affect positively employment and poverty. It has been reported that DACA reduced the likelihood of poverty for households with eligible individuals by 38%. By improving the mental health and wellbeing of immigrants and their children, and their future prospects, DACA can produce long-term important multiplier effects, in terms of cost for the health-care system and loss of productivity to society.

There are an estimated 11 million immigrants in the USA, facing fear of deportation, stigmatisation, poverty, and with limited access to health care. They are also the parents of millions of children, born in the USA. DACA has the potential to improve their life, health, economic opportunity, education, and social and community wellbeing. Surely, DACA is only a partial solution. Still, for many, DACA can make a difference.

There is a public health case, and there is an economic case too. Above all, there is humanity and dignity to consider. These are the principles that should guide policy. Using young immigrants living in the USA as mere pawns in a political chess game will not make America great any time soon. Expanding evidence-based social policies with potential positive economic and health intergenerational outcomes just might.

Most recently, President Trump has indicated willingness to strike a deal with Congressional Democrat leaders for DACA protections in return for greater funding for border protections. We hope that evidence will now displace partisan ideology.