In the 1970s, doctors in the United States performed sterilizations on an estimated 25 to 42% of Native American women of childbearing age, some as young as 15.

Even the lower estimate—one quarter of Native women—is a whopping statistic. The federal government subsidized the sterilizations, which often took place without consent or under great duress.

The procedures marked the culmination of a long history of efforts by federal and local authorities to manage the reproductive lives of Native families, explains Brianna Theobald, an assistant professor of history at the University of Rochester, in her new book, Reproduction on the Reservation: Pregnancy, Childbirth, and Colonialism in the Long Twentieth Century (University of North Carolina Press, 2019).

“The federal government and local authorities have long tried to control indigenous families and women’s reproduction, using tactics such as coercive sterilization and the removal of indigenous children into the white foster care system,” says Theobald.

Her book traces those efforts, but also the response from Native Americans themselves—”widespread activism across Indian country” that arose as a direct consequence of federal reproductive policies.

Theobald adopts as a case study the Crow Reservation in Montana, telling the story of childbearing, motherhood, and activism there from the late 19th century to the present, in relation to federal policies and general trends among healthcare providers on reservations.

She finds that, while essentially colonial in their approach, federal policies regarding Native women’s reproductive decisions were carried out unevenly in the early 20th century, hinging largely on local conditions and actual enforcement on the ground.

“The implementation, or lack thereof, of reproduction-related policies was shaped by local conditions, the availability of resources, the whims of individual employees—and perhaps most significantly, Native response and engagement,” says Theobald.

Here, Theobald answers questions about key elements of her book:

Q: What was life like on Native reservations in the first few decades?

A: I focus mostly on reservations in the West. Conditions on these reservations were extremely difficult in the late 19th century. Men were not allowed to hunt, and government rations were inadequate. At Crow there was an incredible demographic loss—deaths really—a result of not being able to move around and not being able to do what they had done traditionally for sustenance.

They were confined to smaller spaces, which led to the rapid spread of disease. All of this had an effect on women’s health: women of childbearing age were particularly vulnerable to tuberculosis. At the same time, because of this demographic decline, there was a tremendous urgency among Native people to reproduce. So you had fewer women bearing a greater reproductive burden and you can see the outcomes in reduced infant and maternal welfare: greater sickness and mortality.

Q: Why is it important, as you argue, to see reservations as colonial spaces?
A: These are spaces where the federal government has primary and ultimate authority. What I’m talking about here is settler colonialism—when the colonizer, in this case the Europeans and later Americans, come to stay. Their objective is to replicate the societies they left behind. For that, above all, they need land. And to get land, Native peoples had to disappear, in one way or another, for these resources to become available. Historically, this attempted elimination occurred in different ways at different times—through ethnic cleansing and forced removal, sometimes through massacres, and then by the 19th century through cultural assimilation.
Q: How was cultural assimilation, in this context, a form of colonialism?
A: The federal government’s assimilation agenda was an attempt to transform Native peoples into American citizens by forcing them to discard all markers of “Indianness,” adopt English and Western practices, and convert to Christianity.

A lot of that assimilation agenda centered on gender, family, and the home. In the late 19th century, federal authorities, missionaries, and social reformers deemed it really important for Native people to identify as nuclear family units, led by a male head of household. That required marginalizing the extended family, which was essential to Native family structures, and decreased women’s power within the home, within the family, and within her community. The federal government wasn’t entirely successful in this effort, but the objective was clear. 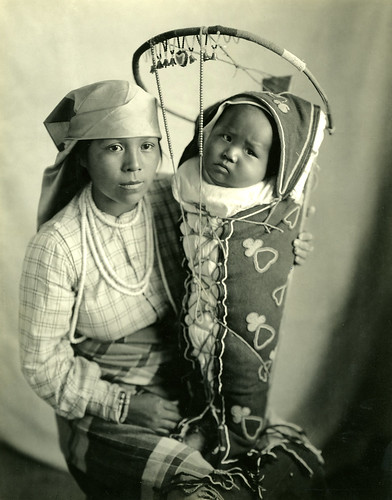 Ida Plamer Walulutum was a native American woman from the Wasco tribe, who lived in Warm Springs, Oregon. This 1913 photograph shows her with her baby. (Credit: H. Trevor Booth or M. Harris Cole via Mathers Museum of World Cultures/Flickr)

Q: You argue that colonial politics have always been, and remain reproductive politics. How so?
A: Efforts to alter and control Native women’s reproductive practices were integral to federal policies that at first glance might seem to have little to do with pregnancy or childbirth. Their reproductive experiences were affected by policies ranging from the allotment of tribal land to the relocation program following World War II. More generally, the federal government assumed greater control over Native reproduction over time.

Q: How else did federal authorities interfere in the family lives of Native Americans?
A: The forerunner of the Bureau of Indian Affairs, the Office of Indian Affairs, had all these different employees on the reservation. Some were supposed to teach the men to farm, field matrons were supposed to go into women’s homes and teach them the art of domesticity, there were teachers, doctors, nurses.

At the Crow Reservation in the late 19th century, I found that the superintendent’s directive to all these different employees was basically to watch what was going on and to report back: report any pregnancies—to curb abortion but also to know paternity, to know if this was out of wedlock, and if so, to pressure a legal Christian marriage. And if a woman had had several births out of wedlock, to determine if punishment might be in order.

This surveillance was concerned with women’s reproductive lives, but also with knowing if a woman had left her husband, which in Crow society would have been fine, but was very much frowned upon and sometimes punished by the federal authorities.

Q: What precipitated the mass sterilizations in the 1970s?
A: The Family Planning Services and Population Research Act of 1970 subsidized sterilizations for Medicaid and Indian Health Service patients. Many Native people received their healthcare through the IHS. We know that after its passage, sterilization rates on many reservations increased. On the Navajo Reservation, for example, they doubled between 1972 and 1978. That doesn’t mean that all these procedures were performed coercively—some women saw it as their best family planning option, given their circumstances—but we do know that the subsidization of the procedure as well as the increased legitimacy of sterilization as a form of birth control at the time facilitated coercive use of the technology.

Q: Native American resistance is a major theme of your book. How have Native women, in particular, resisted these incursions over time?

A: Until midcentury there was tremendous resistance in some areas to the acceptance of government physicians. The women might tell the field nurse, “yes, I’ll come to the hospital” and then wouldn’t. It’s actually quite funny to read the documentary record. These field nurses would write in their reports that they were frustrated that women who were visibly pregnant would just lie to their faces and say, “no, I’m not”—in an effort to maintain reproductive self-determination, to keep reproduction in these gendered and generational networks where they believed it belonged.

In the 1930s, Susie Yellowtail, a Crow woman, took up midwifery because of her dissatisfaction with her own birthing experience at a government hospital.

Another example was the establishment of the American Indian Movement, or AIM, in 1968 in Minneapolis. This was an intertribal group that was very committed to rejecting the assimilationist pressures of the preceding decades—instead focusing on cultural revitalization and the defense of Native sovereignty, Native treaty rights. AIM is just one of several militant groups that became associated with what’s called the Red Power movement.

In the 1970s, Native activism and resistance became very visible, more widespread, and ultimately coordinated nationally and internationally. That’s when Native women really started to organize independently. They formed Women of All Red Nations, WARN—the group that especially took on these sterilization abuses. Under pressure, the US Government Accountability Office investigated the issue in 1976. They released a report, which actually stopped short of saying that government divisions performed sterilizations coercively, but it did raise a number of concerns regarding the consent process. In the aftermath of this report, amidst Native activism, and also activism by African American and Latina women, the Department of Health, Education, and Welfare adopted new regulations that offered some tangible protections for women, which went into effect in 1979.

Q: Where are Native women [in regard to these issues] today? You write that some hospitals on reservations have been forced to limit services or have closed due to chronic underfunding and staffing shortages—forcing some women in labor to travel an hour or two to the nearest hospital to deliver, which is unsafe.
A: There are at least two strands. First, there’s a movement now among Native women who do not want a medicalized birthing experience in any hospital, and who are trying to create alternatives that seem more culturally appropriate to them, and which they view as an enactment of their bodily autonomy and sovereignty. As a result we see pockets of a resurgence of Native midwifery, and Native doulas.

At the same time, there are other Native women who are very upset, for various reasons, that they can no longer give birth at a government hospital on the reservation.

I see these two movements as quite complementary, in terms of the reproductive justice agenda, in that women should have some control over the circumstances under which they give birth. It’s important to note that the Native maternal mortality rate continues to outpace that of white women, for a variety of reasons that are squarely rooted in the colonial history.

Looking at the Way We Walk Can Help Predict Cognitive Decline