No mass gatherings. Stay-at-home orders. Nonessential business closures. Use of cloth face coverings. In April, these and other measures were adopted by states to try to mitigate the spread of COVID-19 in the U.S. and across the globe. A new study published in the Centers for Disease Control and Prevention’s Morbidity and Mortality Weekly Report presents data from a survey of Americans assessing their behaviors and attitudes about these mitigation measures. Senior author Charles A. Czeisler, MD, PhD, Chief of the Division of Sleep and Circadian Disorders at Brigham and Women’s Hospital, along with colleagues from the Brigham, the CDC, Monash University, and Austin Health, analyzed results of the survey administered in May, which found widespread support for the public health measures.

“We believe that routine assessment of public attitudes, behaviors, and beliefs related to COVID-19 and its mitigation should be a priority,” said Czeisler. “This is especially important given that currently, the most effective defense against transmission of COVID-19 is reducing person-to-person contact, which depends on public support and engagement.”

From May 5-12, 2020, a total of 4,042 adults in the U.S. were invited to complete a web-based survey administered by Qualtrics. Participants were recruited using methods to create panels representative of the 2010 U.S. Census by age, gender, race, and ethnicity. Overall, surveys completed by 2,221 U.S. adults were analyzed. Questions in the survey focused on public attitudes, behaviors and beliefs related to stay-at-home orders, nonessential business closures and public health guidance.

Most respondents supported stay-at-home orders and nonessential business closures. Nationwide, 79.5 percent of participants supported these measures, with even greater support in New York City and Los Angeles. Respondents reported a very high level of adherence to public health recommendations designed to slow the spread of COVID-19, including usage of cloth face coverings when in public areas (74.1 percent), maintaining physical distancing (79.5 percent), and avoidance of gatherings of 10 or more people (85.9 percent). 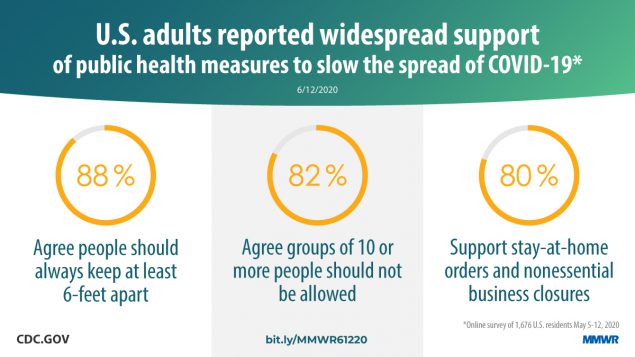 More than 77 percent of adults reported self-isolating and 84 percent believed their state’s COVID-19 community mitigation strategies were the right balance or not restrictive enough. Most respondents (74.3 percent) reported that they would feel unsafe if restrictions were lifted at the time of the survey. Since then, stay-at-home orders have been lifted in many states across the nation.

The authors note that responses to the survey are self-reported and may be subject to recall, response and social desirability biases. The survey also had a lower percentage of responses from Black people than is representative of the U.S. population.

In a preprint paper available on medRxiv, Czeisler and colleagues presented survey results from questionnaires administered from the week of April 2-8. In this survey, the team found broad support for stringent COVID-19 mitigation strategies and widespread concern about the possibility of an economic recession (79.2 percent) and open-endedness of the pandemic (72.2 percent). They found that nearly 4-out-of-5 Americans reported disruptions to their social lives, 4-in-10 reported disruption to work, sleep, family life, productivity and physical activity, and 1-in-5 reported disruption of sexual activity associated with the pandemic and its mitigation. Both surveys suggest that despite these concerns, Americans widely maintained their strong support for community mitigation strategies and public health recommendations in May.

“These findings suggest that Americans have prioritized their health amid the pandemic, notwithstanding considerable adverse economic, social and health consequences,” said Czeisler.

Heat May Kill More People in U.S. Than Previously Reported