Nearly half of obstetrics and gynecology residency programs in the U.S. may lack abortion training if Roe v. Wade is overturned in an upcoming Supreme Court decision, according to a new study by UC San Francisco and UCLA.

Researchers mapped OB-GYN residency programs across the U.S. and highlighted those in the 26 states that are expected to ban abortion if the Supreme Court overturns Roe in its ruling on Dobbs v. Jackson Women’s Health Organization, which is expected by the end of June.

“In 2020, 92% of obstetrics and gynecology residents reported having access to some level of abortion training,” the authors wrote in the study, appearing April 28 in Obstetrics & Gynecology. “We predict that, if Roe v. Wade is overturned, this would plummet to at most 56%.” 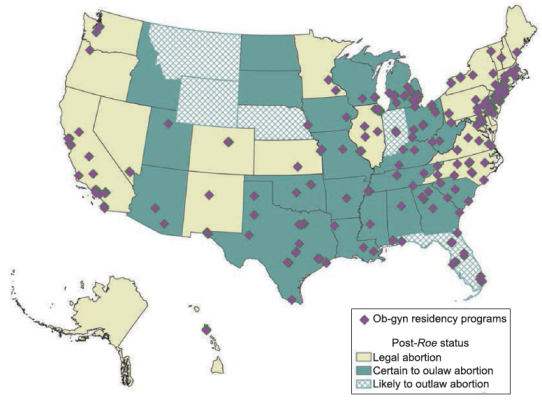 The researchers said their analysis most likely underestimates the impact, as they did not include family medicine and other specialties where residents also receive abortion training.

“Decimating abortion training in half the country will have far-reaching impacts,” said senior author Jody Steinauer, MD, PhD, who directs the Bixby Center for Global Reproductive Healthat UCSF. “It could affect the care of future patients of clinicians who trained in these states wherever they go on to practice. We need to develop new and innovative ways to train OB-GYNs and other clinicians to provide this essential care.”

First author Kavita Vinekar, MD, assistant clinical professor of obstetrics and gynecology in the UCLA School of Medicine, said abortion training also confers other important skills in bedside manner, counseling, trauma-informed care, miscarriage management, and uterine evacuation. “Those are the skills I got in my abortion training that I use every single day in all of the non-abortion care that I do,” she said.

Does the Drug Dapagliflozin Benefit Hospitalized Patients with Covid-19?