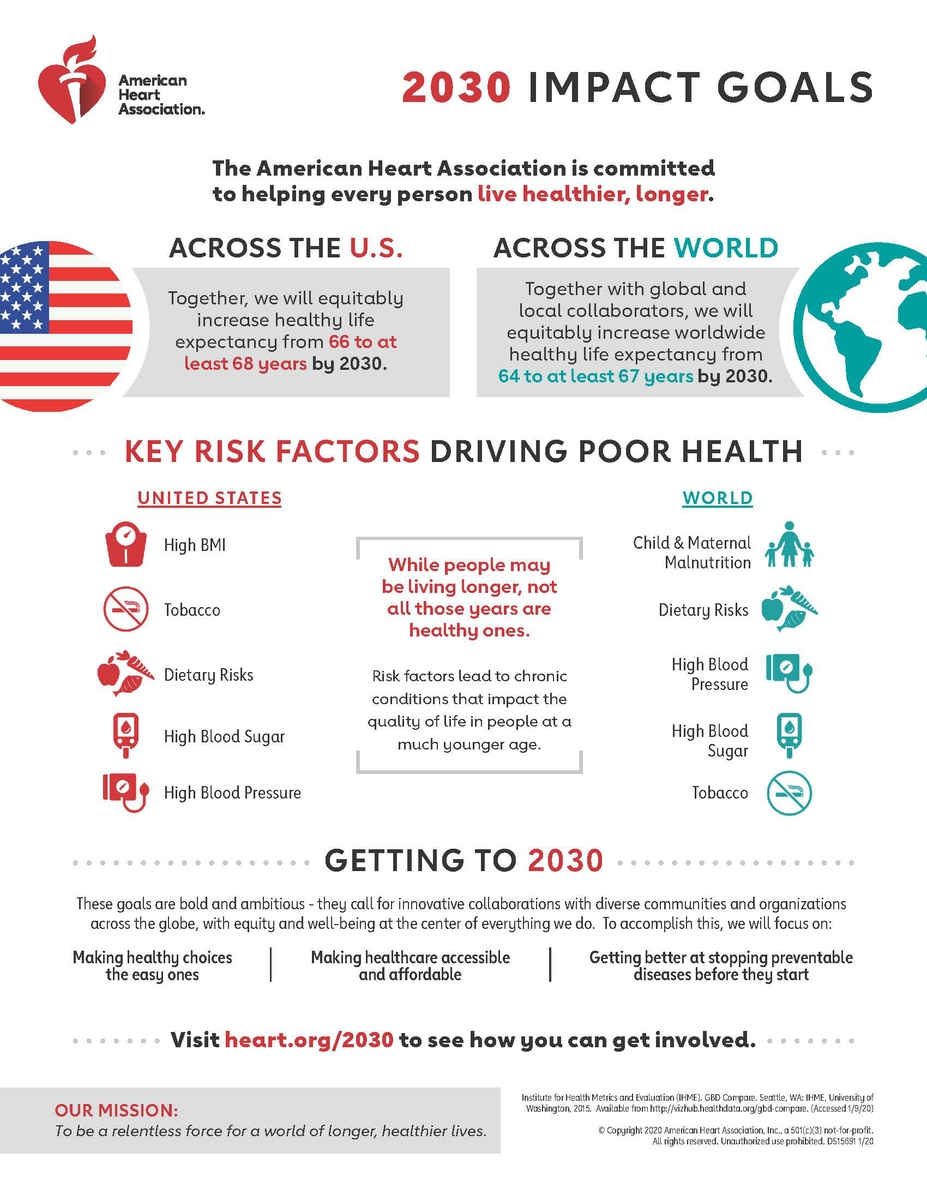 Data reported in the just published American Heart Association’s Heart & Stroke Statistics – 2020 Update, show heart disease and stroke deaths continue to decline, but that trend has slowed significantly in recent years. Further discouraging is that more people are living in poor health, beginning at a younger age, as a direct result of risk factors that contribute to these leading causes of death worldwide.

To build on its mission to be a relentless force for a world of longer, healthier lives, the American Heart Association, the nation’s oldest and largest voluntary organization dedicated to fighting heart disease and stroke, has published a presidential advisory in the journal, Circulation, outlining new national and global 2030 Impact Goals to help all people live healthier for more years of their life.

Across the US: Together, we will equitably increase healthy life expectancy from 66 to at least 68 years by 2030.

Around the world: Together with global and local collaborators, we will equitably increase worldwide healthy life expectancy from 64 to at least 67 years by 2030.

“We know people are living longer thanks in part to nearly a century of dedicated efforts from volunteers, staff and many invaluable supporters joining the American Heart Association in our fight again heart disease and stroke, leading to improvements in disease control and prevention, advancements in medical treatments and improved lifestyle behaviors,” said American Heart Association president Robert A. Harrington, M.D., FAHA. “Unfortunately, not all those years are healthy ones as the effects of chronic illnesses are increasingly impacting the quality of life of people at a much younger age than in the past.”

Goal progress will be tracked by the Health-Adjusted Life Expectancy (HALE) metric, commonly referred to as Healthy Life Expectancy, which anticipates the number of years a person can expect to live in good health. It’s a comprehensive single metric that provides an estimate of overall health across a person’s lifetime and captures both physical and mental health conditions. That is especially relevant to the broader focus on overall health and well-being emphasized in the new goals.

Over the past decade, key factors that support ideal cardiovascular health have seen some positive movement across the U.S. Reports show adults are getting more active and, overall, people are eating healthier, smoking cigarettes less and better controlling their cholesterol. But that good news is offset by major setbacks in other critical areas, especially among youth, a trend that puts upcoming generations at even higher risk for facing major health issues at younger ages.

According to the Association’s Heart & Stroke Statistics – 2020 Update:

Obesity rates are on the rise in children and adults — nearly 40% of U.S. adults and 18.5% of youth are now obese.

Physical activity rates are abysmally low among youth — less than a third of U.S. students take part in a daily physical education class and only 26% meet national recommendations of an hour a day of moderate to vigorous physical activity.

Rates for uncontrolled high blood sugar are leading more people toward diabetic and pre-diabetic conditions — diabetes prevalence in the U.S. increased 129.7% for males and 120.9% for females between 1990 and 2017.

While cigarette smoking in the U.S. is down among adults and at all-time lows for teens, the growing youth vaping epidemic is making daily headlines and the global use of tobacco continues to climb — in 2015, there were more than 933 million smokers, globally.

The trends are even more devastating among certain races, ethnicities, genders and geographic locations — at least 80% of the world’s smokers, most of whom are male, live in low- and middle-income countries.

“We believe every person should enjoy health and well-being no matter their age, gender, race or even the zip code in which they live. And, we know disparities exist even to that level — from one block of a city to another,” said John Warner, M.D., FAHA, 2017-18 president of the American Heart Association, lead author of the presidential advisory and Executive Vice President for Health System Affairs at the University of Texas Southwestern Medical Center in Dallas. “To improve individual health, we must make the environments where we live, work, learn and play equitably supportive of healthy behaviors. We also need to help people better understand the impact their communities have in driving choices for health and well-being.”

In a Harris Poll recently conducted for the American Heart Association, most respondents (93%) agreed that living a long, healthy life is important to them and believe everyone deserves the longest, healthiest life possible (92%). However, there appears to be a disconnect between their desires and their understanding of how those intentions connect back to their behaviors, as less than half of the respondents (49%) strongly agreed their behavior influences their health and well-being and only a third (34%) strongly agreed that their environment influences or supports their health choices.

“We need to make healthy choices the easy ones, make healthcare accessible and affordable and we need to get better at stopping preventable diseases before they start,” said Harrington, the Arthur L. Bloomfield Professor of Medicine and Chairman of the Department of Medicine at Stanford University. “Sometimes parents are more worried about whether they can feed their children anything, much less whether it’s healthy or not. If you’re living with high blood pressure, you shouldn’t have to worry about choosing between whether to pay rent or buy your medicine.”

Harrington said what will drive the success of the goals is working collaboratively with many diverse groups from local neighborhoods to global governments. Additional improvements will need to come through increased efforts for primary and secondary prevention, public health policies that impact populations, the establishment of effective, comprehensible and affordable healthcare systems and modifications to individual lifestyle behaviors.

“Much of this will be an expansion of efforts already underway with many committed collaborators, but it will be critical to bring in new ideas and resources to connect the collective vision with the creativity and innovation needed to make real change,” he said. “We’ll be inviting more people to the table, but even more importantly, we’re asking likeminded stakeholders to invite us in — let us help be a catalyst bringing together elements that can create a healthier world for everyone.”

While the basic metric of healthy life expectancy is well established, tracking progress and understanding trends to meet the 2030 goals will also require improvements in capturing the way health information is reported and analyzed. An accompanying publication to the 2030 goals is an American Heart Association policy statement outlining major recommendations for enhancing cardiovascular health and disease surveillance worldwide.

“In every country, in every city and village, we want everyone of all ages and backgrounds to be healthy and experience every simple joy, make every heartfelt memory, celebrate every special occasion they need and want to do,” said Harrington. “This is so much more than just wanting people to live to a ripe old age, we want them to live healthier, longer. And we’re dedicating ourselves to doing just that over the next decade.”

Siri, Help Me Quit -- What Does Your Smart Device Say When You Ask for Help with Addiction?