In an ant colony, few tasks are as important as gathering food. But the desert heat can pose a challenge for an ant on foraging duty. Recent findings, publishing in the journal iScience on September 27, show how dopamine may influence the behavior of ant foragers in the desert.

“If there’s one thing you can say about an individual ant’s behavior, it’s that it’s doing it for the colony,” says Daniel Friedman, first author and biology PhD candidate at Stanford University. “An ant colony acts almost like a multicellular organism; the colony is the evolutionary unit. We wanted to see if collective behavioral variations among colonies were associated with differences in individual forager brain chemistry.”

First, Friedman’s team collected foragers from six previously studied colonies of red harvester ants in the Arizona desert. Half of the colonies foraged often in dry weather, while the others kept their foragers home on drier days.

When the researchers dissected the foragers’ brains and measured gene expression with RNA sequencing, they found differences between the two groups in the expression of genes related to neurotransmitter signaling and metabolism. Seeing these results, they wondered whether manipulating brain dopamine levels would influence forager behavior in the field. 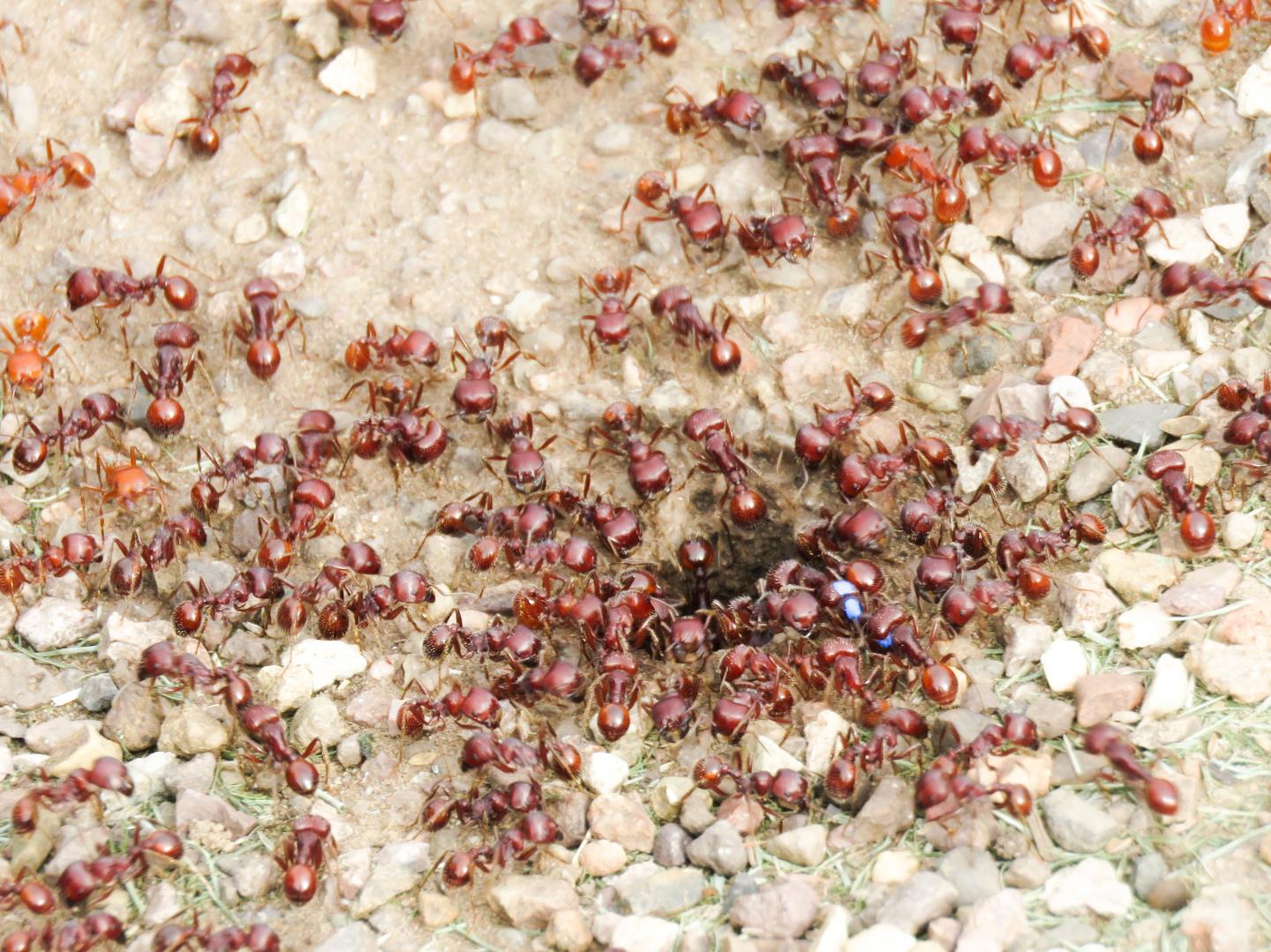 They decided to study a new set of nine colonies in Arizona. For each of these colonies, they treated some nest-mates with dopamine and some with a control solution. They color coded the ants by group with paint.

“I would go out to a colony and collect foraging ants just after they had left the nest,” says Friedman. “Then I would drive them back to the lab, put them on ice to slow them down, and paint their heads so I would know to which group they belonged. Then I would drop the dopamine or control solution into their mouths and take them back to their colonies.”

The day after administration, the researchers observed that dopamine-treated ants went on more foraging trips than their control-treated nest-mates. They also found that the dopamine-affected colonies seemed naturally more sensitive to humidity, foraging more on muggier days and staying home on drier days.

To verify their results, the team repeated the experiment but added a group treated with 3-iodo-tyrosine, a chemical that inhibits dopamine. They saw the opposite effect: the inhibitor of dopamine synthesis caused treated ants to forage less.

“The increases in forager brain dopamine seemed to increase individual ant foraging. That supports the idea that behavioral differences between nest-mates might be related to differences in brain dopamine levels,” says Friedman. “We know that the individual risk that the foragers take relates to the collective decision-making of the colony, but there’s a lot more to learn there.”

In future studies, Friedman and his team plan to examine the effects of molecules related to dopamine to see whether the results they found are dopamine-specific. They also plan to watch more ant colonies in various habitats to see how different environmental conditions influence foraging behavior.

“It’s really fascinating to test our predictions in the field, rather than the lab,” says Friedman. “It’s amazing to see the animal in its evolved habitat. Despite the problems of having to drive out to Arizona and throw ants in liquid nitrogen, all that–it’s worth it.”