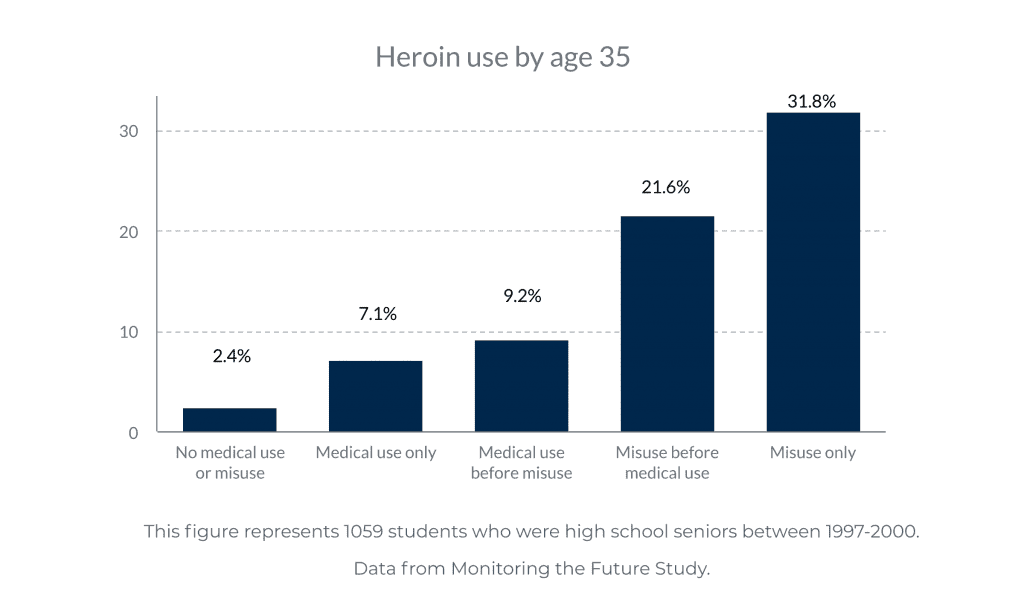 Nearly one-third of students who reported misusing prescription opioids as high school seniors between 1997 and 2000, but did not have a history of medical use, later used heroin by age 35, according to a University of Michigan study.

The research also found that 21% of seniors in the same period, who misused prescription opioids and later received an opioid prescription, went on to use heroin by age 35, said lead researcher Sean Esteban McCabe, professor and director of the Center for the Study of Drugs, Alcohol, Smoking and Health at the U-M School of Nursing.

“It is a very timely study given the number of adolescents and young adults who were overprescribed opioids and who are now aging into adulthood,” he said. “We need to follow these generations to assess their risk for developing later problems.”

Researchers focused on 25 cohorts of high school seniors between 1976 and 2000, following them from age 18 to age 35. They used data from 11,012 individuals from the national Monitoring the Future study, funded by the National Institute on Drug Abuse.

“There was an increase in opioid prescribing in the 1990s and 2000s that contributed to the opioid epidemic,” he said. “Health professionals and the larger public health community owe it to these individuals to understand the downstream effects of overprescribing and develop effective interventions.”

The researchers were surprised by the large uptick in heroin use among the more recent cohorts, and the findings partially explain why opioid overdoses have skyrocketed, Veliz said.

“These prevalence estimates of heroin use are very high, considering the general population annual estimates are less than 1%,” McCabe said. “And anyone in the study with a history of heroin use at baseline was excluded, which makes the findings more conclusive.”

Based on national estimates, the number of people in the United States using heroin has increased from 373,000 in 2007 to 808,000 in 2018. The largest increase in heroin use over this time period has occurred among adults aged 26 and older.

So what’s the takeaway for parents and health care professionals?

“There are several generations who were overprescribed controlled medications with high misuse potential, such as opioids,” McCabe said. “Prescribing fewer opioids and the correct dosage is only one piece to the puzzle.

“The solution requires a much more comprehensive plan that includes better education, screening and interventions to reach high-risk individuals who often fly under the radar in many health care settings. We all played a role in creating the opioid crisis and we owe it to these individuals to address the problem.”