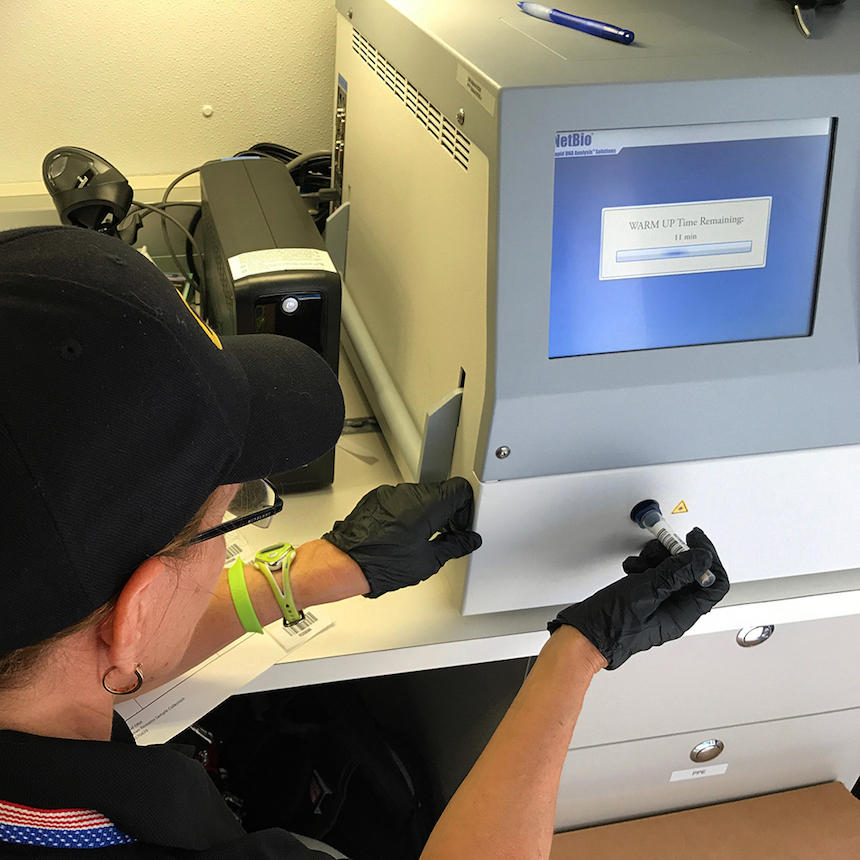 Rapid DNA technology developed by the Department of Homeland Security Science and Technology Directorate (S&T) has recently been used to identify simulated “victims” in several mass casualty exercises across the United States. The technology greatly expedites the testing of deoxyribonucleic acid (DNA), the only biometric that can accurately verify family relationships. With results available in ninety minutes or less, S&T’s Rapid DNA technology can be used on the scene of mass fatality events, in refugee camps around the world, or at immigration offices.

“Rapid DNA dramatically reduces the time it takes to reunify families and mass-casualty victims. What took days to several weeks (due to delays caused by shipping DNA samples to regional laboratories for testing) can now be accomplished in hours, onsite,” explained Christopher Miles, S&T’s Deputy Director for Standards Integration and Application.

S&T says that the technology, originally developed in partnership with the Department of Justice and the Department of Defense, was commercialized by S&T in 2015 and is now actively working to transition it to other DHS components, including Customs and Border Protection and Immigrations and Customs Enforcement, as well as other federal, state and local government organizations. The technology can support efforts in immigration, human trafficking prevention, reunification of family members following mass casualties, and DHS law enforcement investigations.

The Rapid DNA technology was put to the test in early May during a full-scale, mass-fatality exercise at locations around Dayton, Ohio. S&T’s Capability Development Support (CDS) Office of Standards (STN) joined the Ohio Department of Health, Ohio National Guard, Ohio Emergency Management Agency, Montgomery County Sheriff’s Office, Dayton & Montgomery County Public Health, Miami Valley Hospital and other local and state response agencies in the exercise, where the technology was used to confirm that DNA placed at the disaster sites matched the DNA of family members.

This exercise simulated local, state and federal responses to a mass fatality incident, including emergency and public health responders and mass fatality and mortuary assistance, which support and coordinate efforts to mitigate the impact of these incidents. Miles and a team of Rapid DNA operators brought Rapid DNA equipment to the exercise.

“The Rapid DNA equipment proved valuable, both as a technical tool and a way to help families handle a situation most would find unimaginably stressful,” said Miles.

In preparation for the exercise, a Rapid DNA team brought two Rapid DNA instruments for demonstration at the Montgomery County Crime Laboratory, which provided blood samples, Flinders Technology Associates DNA collector paper and cheek swabs (buccal swabs) of DNA laboratory staff. The Rapid DNA team ran eleven samples in two hours and received results sufficient to identify the persons in 10 of those samples. The remaining blood sample had too much blood on the swab, which saturated that particular result.

The simulation began with an announcement of a gas explosion and partial structural collapse that trapped 300 persons in rubble and caused many fatalities. As local fire and emergency services put out the fire and began moving victims to local hospitals, the medical surge rapidly exceeded local healthcare capabilities

During the exercise, the Rapid DNA team demonstrated that DNAresults can be obtained before the deceased are sent to storage and before family members leave family assistance centers. This process ensures good DNA samples are collected in a timely manner, families are reunited quickly and morgue and family assistance center operations are closed down as rapidly as possible. Rapid DNA saves time and money during mass fatality operations.

In late May, the technology was used at another mass casualty exercise in Florida. Miles said that both exercises used mobile morgues and family information centers as parts of their scenarios, an important aspect when reacting to disaster situations with heavy loss of life.
“We are demonstrating that DNA collected from victims at the morgue can be matched to family members that report to the family information center. DNA is the only biometric that verifies that family members are biologically related,” Miles explained. “Rapid DNA is fast enough that results can be obtained before family members leave or before human remains are sent off to storage.”