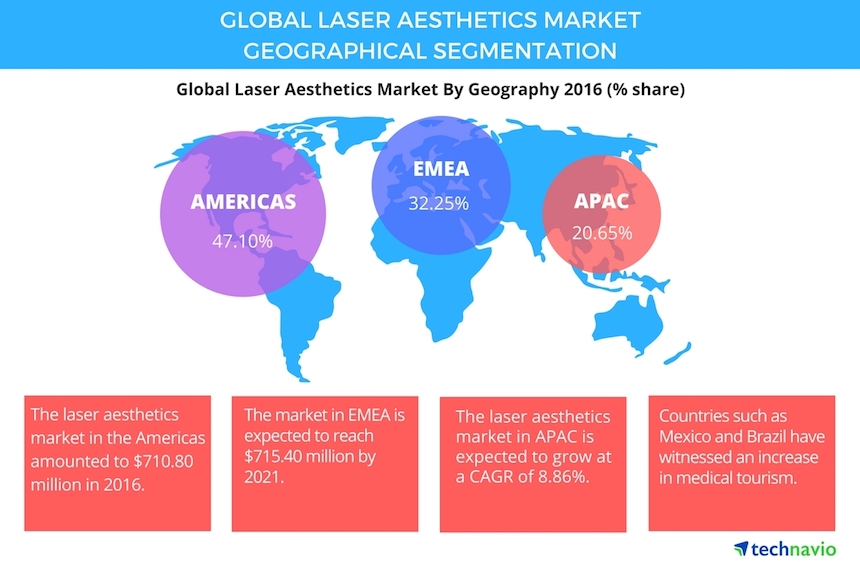 The global laser aesthetics market is projected to grow at a CAGR of nearly 8 percent over the forecast period 2017-2021, according to Technavio’s latest report, which covers the market’s outlook and growth prospects. Based on the product type, the market is divided into body contouring and laser resurfacing devices segments.

The global laser aesthetics market is driven by the growing disposable income of people who prefer minimally invasive procedures such as lasers to enhance their appearance. This has resulted in the upgradation of aesthetic clinics with new and technologically advanced devices. The growing acceptance of cosmetic surgeries has contributed to the growth in the number of end-users.

Laser aesthetics marker in the Americas

“Since the approval of aesthetic laser devices by the Food and Drug Administration, the laser aesthetics market in the Americas has undergone rapid expansion and is responsible for the availability of advanced medical treatments. The ability of direct laser energy to provide accurate target makes the technology appealing,” says Amber Chourasia, a lead analyst at Technavio for health and wellness research.

The United States recorded the maximum number of non-surgical procedures such as laser hair removal, fat reduction, and laser liposuction. The growth of the market is allowing physicians to adopt advanced cosmetic procedures for non-surgical procedures such as laser tattoo removal, laser hair removal, laser wrinkle reduction, skin tightening, and photo facial. The market for laser aesthetics in the United States is followed by Mexico, Brazil, and Canada.

People living in countries such as the United Kingdom, France, Germany, Italy, Saudi Arabia, the UAE, and Kuwait have high disposable incomes and spend a significant proportion of it on improving their appearance. The region witnesses a high demand for laser-based aesthetic devices for skin rejuvenation and resurfacing and body contouring.

The major revenue contributors to the laser aesthetics market in EMEA were Germany, the UK, Spain, Italy, and France. An aging population, changing lifestyles, and preference for aesthetic procedures have resulted in the growth of the laser aesthetics market in the region. In MEA, the demand for aesthetic procedures will increase in countries such as Dubai and Saudi Arabia due to the growth of medical tourism.

“The laser aesthetics market in APAC is expected to showcase a CAGR of nearly 9 percent over the forecast period due to the improvements in the healthcare infrastructure. Japan, India, South Korea, Australia, and China are projected to generate the majority of the revenue in the region,” says Chourasia.

The increase in disposable income, awareness about sophisticated self-care systems, and increase in the number of new healthcare institutions and public health systems are driving the growth of the market in the region. The market has witnessed the growing acceptance of cosmetic procedures, which is also boosting the market growth. Local vendor based in APAC manufacture products at lower prices, which is a drawing a growing number of customers from other regions as well.