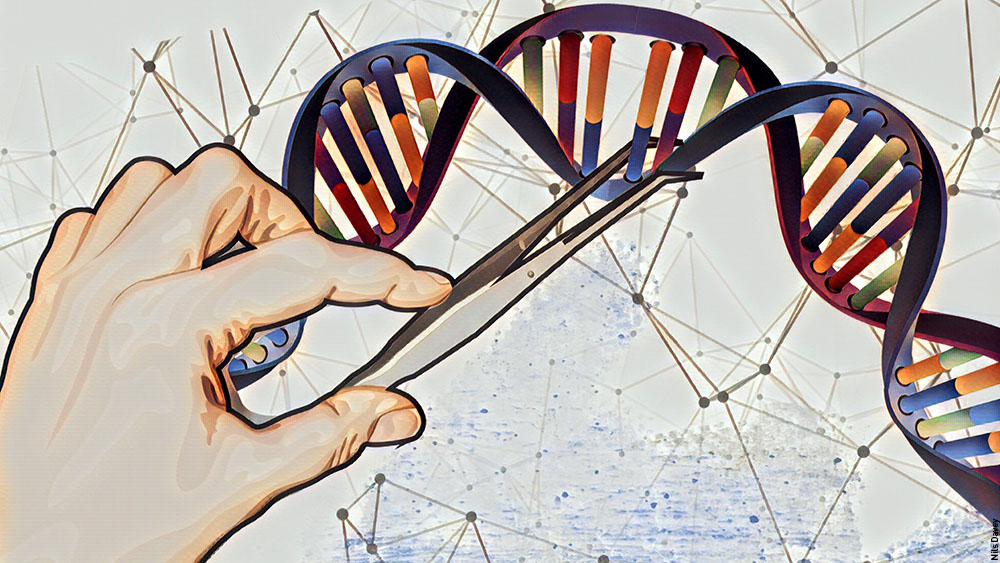 Researchers at Carnegie Mellon University and Yale University have for the first time used a gene editing technique to successfully cure a genetic condition in a mouse model. Their findings, published in Nature Communications, present a promising new avenue for research into treating genetic conditions during fetal development.

An estimated 8 million children are born each year with severe genetic disorders or birth defects. Genetic conditions can often be detected during pregnancy using amniocentesis, but there are no treatment options to correct these genetic conditions before birth.

“Early in embryonic development, there are a lot of stem cells dividing at a rapid pace. If we can go in and correct a genetic mutation early on, we could dramatically reduce the impact the mutation has on fetal development or even cure the condition,” said Danith Ly, professor of chemistry in Carnegie Mellon’s Mellon College of Science.

In this study, the researchers used a peptide nucleic acid-based gene editing technique that they had previously used to cure beta thalassemia, a genetic blood disorder that results in the reduced production of hemoglobin, in adult mice.

Peptide nucleic acids are synthetic molecules that combine a synthetic protein backbone with the nucleobases found in DNA and RNA. The PNAs used in this study were created by Ly at Carnegie Mellon’s Center for Nucleic Acids Science and Technology (CNAST), a leading center for PNA science.

Their technique uses an FDA-approved nanoparticle to deliver PNA molecules paired with donor DNA to the site of a genetic mutation. When the PNA-DNA complex identifies a designated mutation, the PNA molecule binds to the DNA and unzips its two strands. The donor DNA binds with the faulty DNA and spurs the cell’s DNA repair pathways into action, allowing it to correct the error.

In the current study, the researchers used a technique similar to amniocentesis to inject the PNA complex into the amniotic fluid of pregnant mice whose fetuses carried a mutation in the beta-globin gene that causes beta thalassemia.

With just one injection of the PNA during gestation, the researchers were able to correct 6 percent of the mutations. This 6 percent correction was enough to cause dramatic improvements in the mice’s symptoms of beta thalassemia ¬- and enough for the mice to be considered cured. Mice that were treated using PNA while in utero had levels of hemoglobin that were within the normal range, less spleen enlargement and increased survival rates.

The researchers also noted that there were no off-target effects from the treatment, a finding that might suggest this method would be preferable over other gene editing techniques like CRISPR/Cas9, which can erroneously damage off-target DNA.

“CRISPR is much easier to use, which makes it ideal for laboratory research. But the off-site errors make it less useful for therapeutics,” said Ly. “The PNA technique is more ideal for therapeutics. It doesn’t cut the DNA, it just binds to it and repairs things that seem unusual. We looked at 50 million samples and couldn’t find one offsite error when we used our PNA gene editing technique.”

The researchers believe that their technique might be able to achieve even higher success rates if they can administer it multiple times during gestation. They also hope to see if their technique can be applied to other conditions.