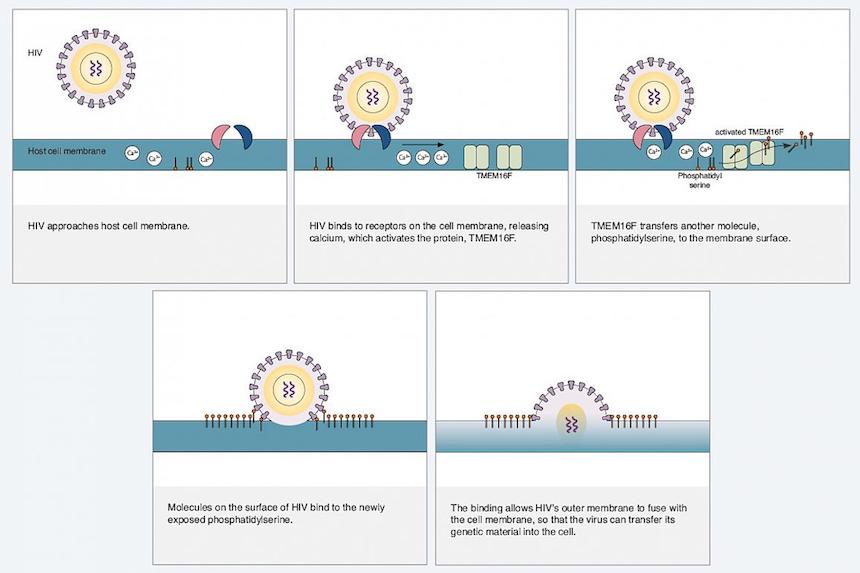 Researchers at the National Institutes of Health have discovered a key step in the process that HIV uses to inject its genetic material into cells. Working with cultures of cells and tissues, the researchers prevented the invasion process by chemically blocking this step, preventing HIV genetic material from entering cells. The findings could lead to the eventual development of new drugs to prevent HIV infection.

To infect a cell, a protein on the surface of HIV binds to molecules on the cell’s surface. This binding process initiates a sequence of events that ends with HIV’s outer membrane fusing with the cell’s membrane. The virus’ genetic material then passes into the cell. The researchers discovered that the binding process activates a protein, called TMEM 16F, that transfers another molecule inside the cell membrane, phosphatidylserine, to the membrane’s outer surface. They believe molecules in the viral membrane bind with the exposed phosphatidylserine on the cell surface to enhance the virus’ fusion to the cell.

The researchers found that blocking the transfer of phosphatidylserine to the cell surface — or attaching another molecule to phosphatidylserine so it can’t bind with HIV — prevents the virus from infecting the cell. Theoretically, developing drugs that could block each of these steps could provide the basis for treatments to prevent HIV from infecting cells, but much more research is needed.

The ‘French Paradox’ Turned Out to Be an Illusion, but It Led to Some Interesting Research