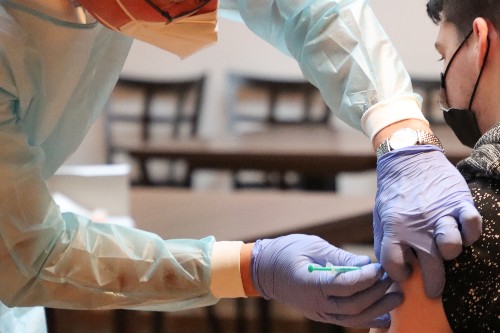 Informing people about how well the new COVID-19 vaccines work could boost uptake among doubters substantially, according to new research.

The study, led by the University of Bristol and published in the British Journal of Health Psychology, shows the importance of raising awareness of vaccine efficacy, especially if it compares very favourably to another well-established vaccine.

The research focused on adults who were unsure about being vaccinated against COVID-19. Those who were given information about the vaccine’s efficacy scored 20 per cent higher on a measure of willingness to be vaccinated, compared to those who received no information. This improved receptivity increased by as much as double among survey respondents who were also given information about how COVID-19 vaccines perform in comparison to the annual flu vaccine.

Lead author Professor Colin Davis, Chair in Cognitive Psychology at the university’s School of Psychological Science, said “The general positive effect of providing key information is not surprising, as we knew already that people’s perception of the effectiveness of a vaccine is an important factor in their vaccination intentions. But the extra benefit of providing comparative information is a novel finding which underscores the vital role of communication in improving vaccine uptake.”

The findings come from two surveys of UK adults, aged between 18 and 85, last December. The first survey of 2,400 people revealed that 65 per cent agreed or strongly agreed they would have the COVID-19 vaccine, which at the time wasn’t widely available. A further 12 per cent were equally sure that they would not take the vaccine. However, in the middle range were around a quarter (23 per cent) of respondents who expressed reservations and uncertainty about whether they would be vaccinated.

A second survey of 481 of those fence-sitters followed, which aimed to discover whether providing certain relevant information might nudge them to overcome their hesitancy and be more inclined to be vaccinated.

When no information was given, the majority of the participants were unsure about having the vaccine. Confidence levels grew by some 20 per cent when they were told of the overwhelming efficacy of the Pfizer and Moderna vaccines, 95 per cent and 94 per cent respectively at the time. Their likelihood of being vaccinated grew by a similar margin again, when the information about the COVID-19 vaccine also stated the effectiveness of the flu vaccine over the past 15 years, according to the US Centers for Disease Control, which stands at some 40 per cent.

“The findings show the positive potential of the contrast effect. Pointing out factual comparisons can be helpful when making a decision, particularly about something new. People value evidence-based information and this can provide affirmation and reassurance for cautious groups,” Professor Davis said.

“It’s also important to note the information we provided about the lower effectiveness of the flu jab did not change people’s intention to have the flu vaccine. Perception of the flu vaccine benefits from its familiarity and an established sense of safety and efficacy. By positively associating the COVID-19 vaccine with the well-known flu jab, people are reminded that vaccines work and they are safe.”

The latest figures show vaccine uptake is slowing. Over the last two months the average number of vaccine doses being administered daily has dropped from over half a million doses a day to just under a third of a million. This reflects a much lower rate of uptake among younger groups. In England while at least 95 per cent of 55 to 79-year-olds have had their first dose and at least 80 per cent of those aged 35 and above, the figure drops to some 76 per cent among 30 to 35-year-olds, 65 per cent for 25 to 29-year-olds, and just 57 per cent of 18 to 24-year-olds, according to latest NHS England data.

Professor Davis said “Younger people perhaps perceive themselves to be less vulnerable to COVID-19 virus. While mortality rates are fortunately much lower in this age group, exposure to the virus carries the danger of long-COVID in people of all ages. By getting vaccinated young people can protect themselves and also reduce transmission levels in the population as a whole. The vaccination campaign is by no means over and this study shows the importance of informed and targeted communication.”