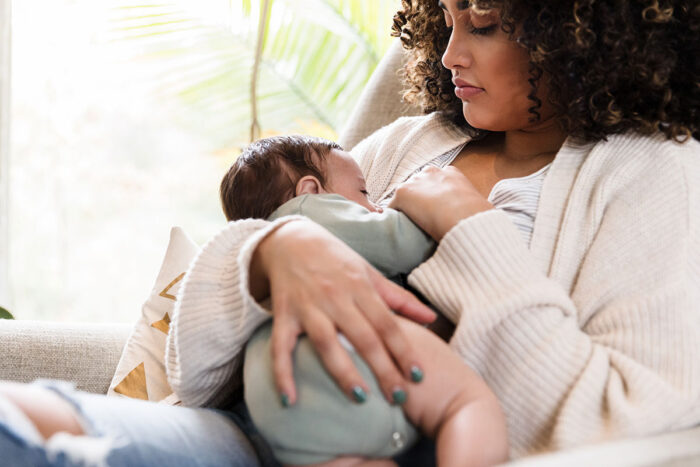 In December 2020, two novel messenger RNA (mRNA) vaccines for SARS-CoV-2 received emergency use authorization from the U.S. Food and Drug Administration; however, the early trials excluded lactating women, leading to questions about their safety in this specific population.

In a recent study, published in the online edition of Breastfeeding Medicine, researchers at University of California San Diego School of Medicine found that breastfeeding mothers who received either the Pfizer-BioNTech or Moderna vaccination reported the same local or systemic symptoms as what has been previously reported in non-breastfeeding women, with no serious side effects in the breastfed infants.

“A mother’s first concern is the safety of her child,” said Christina Chambers, PhD, MPH, professor of pediatrics at UC San Diego School of Medicine and professor in the Herbert Wertheim School of Public Health and Human Longevity Science. “Our study, along with previous research, suggests the Pfizer and Moderna vaccines are not red flags for breastfeeding mothers and their infants.”

The results found that more than 85 percent of the 180 breastfeeding women in the study who received an mRNA COVID-19 vaccine reported temporary localized symptoms, such as pain, redness, swelling or itching at the injection site, and systemic side effects, including chills, muscle/body aches, fever and vomiting, with higher frequency following the second dose.

“We want to emphasize that the reduction in milk supply was in a small subset of women and came back fully within 72 hours after vaccination. We also cannot be certain that the supply reduction was a side effect of the vaccine or another unknown factor,” said Chambers. “What we do know is that the vaccine is incredibly effective in providing protection from COVID-19, which has proven to be a devastating and serious virus with possible long-term side effects.”

Irritability and poor sleep were reported in some breastfed children, but no serious adverse events.

“We know the many benefits of breastfeeding. Breast milk provides an abundance of nutritional components to infants that provide many health benefits, from stronger immune systems to lower rates of obesity and other conditions and illnesses,” said Chambers.

“Our results should encourage lactating women to get the COVID-19 vaccine and to continue to breastfeed their infants. They do not have to choose one over the other. Both are critical.”

The breastfeeding women recruited for the study enrolled into the Mommy’s Milk Human Milk Research Biorepository at UC San Diego, which strives to understand the numerous benefits human milk offers at a molecular level and uses these findings to improve the health and development of all children.

“This study would not be possible without the tremendous support of our staff and students, and the women across the nation who were willing to enroll and provide breast milk samples,” said Kerri Bertrand, first author of the study and research manager of the Mommy’s Milk Human Milk Research Biorepository. “Together, we are finding life-saving, evidence-based answers to crucial questions that arose when the pandemic first hit.”

The researchers noted that a limitation of the study was that symptoms post vaccination were self-reported and suggested additional studies will be needed to see if the findings can be generalized to a larger population.

Diet May Affect Risk and Severity of Covid-19