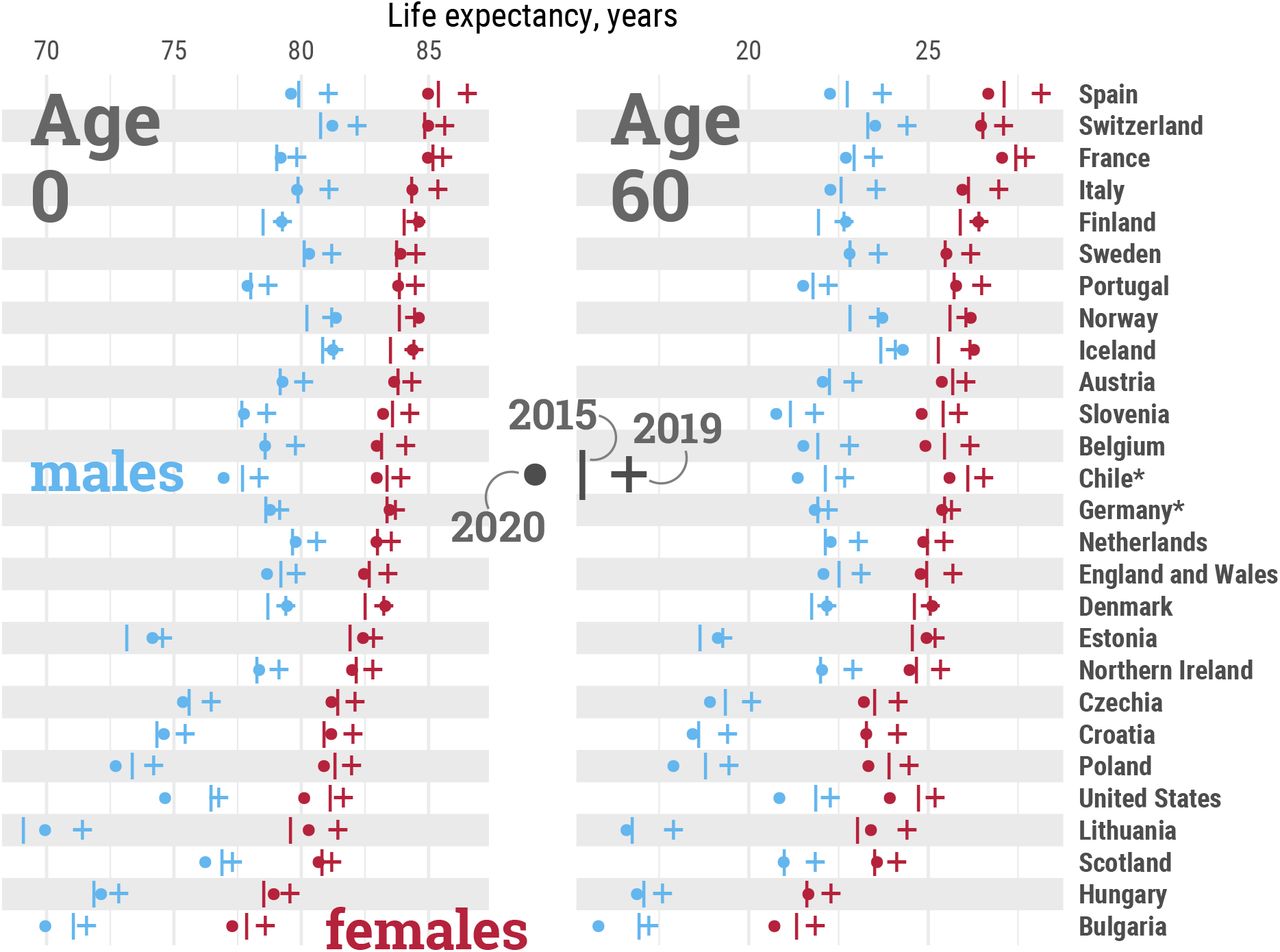 The COVID-19 pandemic triggered life expectancy losses not seen since World War II in Western Europe and exceeded those observed around the dissolution of the Eastern Bloc in central and Eastern European countries, according to research published by scientists at Oxford’s Leverhulme Centre for Demographic Science.

The research team assembled an unprecedented dataset on mortality from 29 countries, spanning most of Europe, the US and Chile – countries for which official death registrations for 2020 had been published. They found that 27 of the 29 countries saw reductions in life expectancy in 2020, and at a scale which wiped out years of progress on mortality, according to the paper published today in the International Journal of Epidemiology.

Women in 15 countries and men in 10 countries were found to have a lower expectancy at birth in 2020 than in 2015, a year in which life expectancy was already negatively affected by a significant flu season.

According to the study’s co-lead author Dr. José Manuel Aburto, ‘For Western European countries such as Spain, England and Wales, Italy, Belgium, among others, the last time such large magnitudes of declines in life expectancy at birth were observed in a single year was during WW-II.’

But, he says, the scale of the life expectancy losses was stark across most countries studied, ‘22 countries included in our study experienced larger losses than half a year in 2020. Females in eight countries and males in 11 countries experienced losses larger than a year. To contextualize, it took on average 5.6 years for these countries to achieve a one-year increase in life expectancy recently: progress wiped out over the course of 2020 by COVID-19.’

Across most of the 29 countries, males saw larger life expectancy declines than females. The largest declines in life expectancy were observed among males in the US, who saw a decline of 2.2 years relative to 2019 levels, followed by Lithuanian males (1.7 years).

In addition to these age patterns, the team’s analysis reveals that most life expectancy reductions across different countries were attributable to official COVID-19 deaths.

Dr. Kashyap adds, ‘While we know that there are several issues linked to the counting of COVID-19 deaths, such as inadequate testing or misclassification, the fact that our results highlight such a large impact that is directly attributable to COVID-19 shows how devastating a shock it has been for many countries. We urgently call for the publication and availability of more disaggregated data from a wider-range of countries, including low- and middle-income countries, to better understand the impacts of the pandemic globally.’

Life expectancy, also known as period life expectancy, refers to the average age to which a newborn live if current death rates continued for their whole life. It does not predict an actual lifespan. It provides a snapshot of current mortality conditions and allows for a comparison of the size of the mortality impacts of the pandemic between different countries and populations.

Tense Decision-Making as CDC Joins FDA in Recommending Pfizer Booster Shot for 65 & Up, People at High Risk and Those with Occupational Exposure to Covid-19