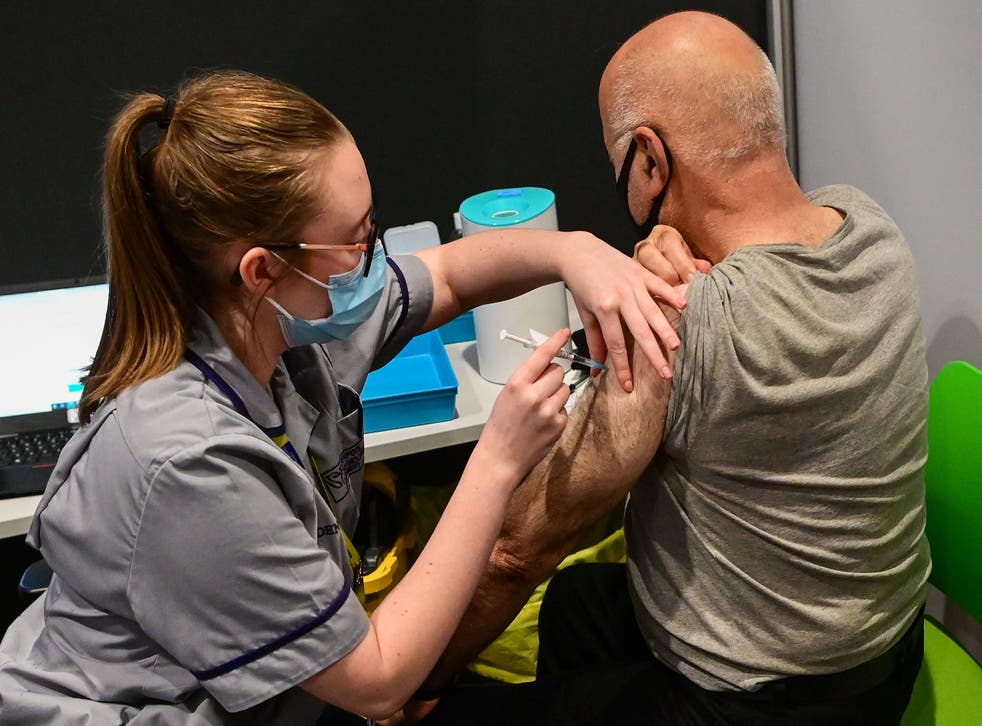 The protection offered by the Oxford-Astra Zeneca Covid-19 vaccine declines after three months of receiving two doses, a study says.

The findings – drawn from datasets in two countries – suggest that booster programmes are needed to help maintain protection from severe disease in those vaccinated with Oxford-Astra Zeneca, experts say.

In Scotland, when compared with two weeks after receiving a second dose, there was approximately a fivefold increase in the chance of being hospitalised or dying from Covid-19 nearly five months after being double vaccinated.

The decline in effectiveness begins to first appear at around three months, when the risk of hospitalisation and death is double that of two weeks after the second dose, experts say.

The risk increases threefold just short of four months after the second vaccine dose. Similar numbers were seen for Brazil.

Researchers were able to compare data between Scotland and Brazil as they had a similar interval between doses – 12 weeks – and initial prioritisation of who was vaccinated – people at highest risk of severe disease and healthcare workers.

The dominant variant was different in each country during the study period – Delta in Scotland and Gamma in Brazil – meaning the decline in effectiveness is likely because of vaccine waning and the impact of variants.

The study also estimated vaccine effectiveness at similar fortnightly intervals by comparing outcomes of people who have been jabbed with those who are unvaccinated.

But experts warned these figures should be treated with caution because it is becoming harder to compare unvaccinated people to vaccinated people with similar characteristics, particularly among older age groups where so many people are now vaccinated..

The study is part of the EAVE II project, which uses anonymised linked patient data in Scotland to track the pandemic and the vaccine roll out in real time.

These findings have been published in The Lancet.

Professor Aziz Sheikh, Director of the University of Edinburgh’s Usher Institute and EAVE II study lead, said: “Vaccines have been a key tool in fighting the pandemic, but waning in their effectiveness has been a concern for a while. By identifying when waning first starts to occur in the Oxford-Astra Zeneca vaccine, it should be possible for governments to design booster programmes that can ensure maximum protection is maintained.

“If eligible for a booster and you have not had yet had one, I would highly recommend that you book one soon.”

Professor Vittal Katikireddi at the University of Glasgow said: “Our analyses of national datasets from both Scotland and Brazil suggest that there is considerable waning of effectiveness for the Oxford AstraZeneca vaccine, with protection against severe Covid-19 falling over time.

“We studied two million people in Scotland and over 42 million people in Brazil who had received two doses of the Oxford-AstraZeneca vaccine. More than four months after receiving a second dose, the risk of experiencing either a Covid-19 hospitalisation or death was approximately five times greater than the period of maximum vaccine protection after accounting for changes in infection rates and a range of other factors.

“Our work highlights the importance of getting boosters, even if you’ve had two doses of the Oxford AstraZeneca vaccine, as soon as you are able to.”

The study was funded by the Medical Research Council, UK Research and Innovation Industrial Strategy Challenge Fund, the National Institute for Health Research and Health Data Research UK (HDR UK), and was supported by the Scottish Government.

Professor Andrew Morris, Director of Health Data Research UK said, “This research is a great example of what can be achieved through global collaboration when it comes to the use of data for health research. By drawing on findings from data sets in two countries with differing dominant COVID-19 variants, the researchers have been able to disentangle vaccine waning from the effects of changes in variants – strengthening the evidence for the ongoing booster programme.

“Health Data Research UK is pleased to have been able to support both the development of these data sets, and their harmonised analysis, as part of our mission to enable global and trustworthy sharing of data to allow major COVID-19 research questions to be addressed at pace.”

Israel to Ban Travel to U.S., Canada Over Omicron Variant

News from Annals of Internal Medicine