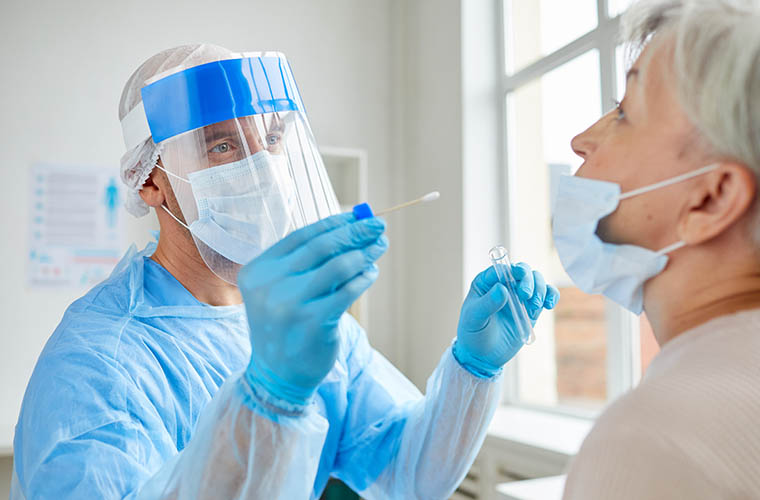 PCR swab tests that look for viral RNA have become the gold standard for identifying infection with the SARS-CoV-2 virus, but their results aren’t 100% accurate. This week in  mSystems, researchers report that testing for levels of certain immune-related genes in an infected individual, in addition to looking for genetic material of the virus itself, could increase diagnostic accuracy.

Researchers compared gene expression data from people diagnosed with COVID-19 to those of people diagnosed with other viral respiratory illnesses and people with non-viral conditions. The analysis revealed that expression of a combination of 2 host genes is strongly associated with SARS-CoV-2 infection. Furthermore, a test for that genetic response could be readily incorporated into existing PCR assays and retain its accuracy for existing and future variants of the virus.

“We envision this as an add-on to a PCR test that still looks for direct evidence of the virus and uses the host genes as a fallback to make sure we catch situations where there might be false positive or false negative results from the viral PCR,” said computational biologist Eran Mick, Ph.D., at the University of California, San Francisco.

Mick was one of 3 lead authors on the paper. The other 2 were UCSF microbiologist Estella Sanchez-Guerrero, Ph.D., and Jack Albright, an undergraduate student at Stanford University, who began working on the project as a high school intern at the Chan Zuckerberg (CZ) Biohub. Infectious disease researcher Charles Langelier, M.D., Ph.D., also at UCSF and CZ Biohub, was senior author on the study.

The U.S. Food and Drug Administration approved the first PCR test for COVID-19 in the spring of 2020. However, during widespread use the test is vulnerable to false negatives—especially as the virus evolves into new variants that might escape detection—and false positives as through contamination by other samples in a testing lab. A person who received a false negative result might get sick without treatment and continue to spread the virus. A false positive result could cause a person to endure unnecessary isolation or have planned medical procedures canceled.

“There are a lot of repercussions,” said Langelier.

In November 2020, Mick and Langelier led a study that demonstrated COVID-19 causes a unique gene expression pattern in infected individuals. The observation prompted them to investigate whether those genes might have some diagnostic utility. In previously published work, the team used RNA sequencing data from nasopharyngeal swabs to identify combinations of multiple genes that could serve as diagnostic classifiers for COVID-19.

However, according to Langelier, testing for the response of a large number of genes isn’t feasible on a routine basis and is incompatible with existing clinical PCR tests. For the new work, the researchers tested a range of 2-gene combinations to find a pair that could accurately diagnose COVID-19. They found that the optimal signature included  IFI6, a gene stimulated by interferon and strongly induced in COVID-19 compared to non-viral conditions, and  GBP5,  which is strongly induced in other viral infections.

“So many different biological processes change in the setting of an infection,” said Langelier. “It was surprising that all of that complex biology could be distilled down to these 2 genes with predictive value.”

Once they identified the gene pair, the team showed that the classifier could be included in a PCR assay, is unaffected by cross-contamination (because it measures the host response) and works for all common variants of the virus.

“To bring it down to such a small number of genes is a game changer,” said Mick.

Mick noted that this 2-gene host signature is designed to be used in combination with a viral PCR test to diagnose COVID-19 because there is still significant overlap between the response to SARS-CoV-2 and the response to other viral infections. However, a purely host-based classifier could be used as a broad-range surveillance tool to identify people infected with any respiratory virus. Even before the pandemic, Mick noted that viral infections were a major public health issue, and many went undetected. A diagnostic tool that flags viral infections could be useful for screening vulnerable populations in nursing homes or hospitals.