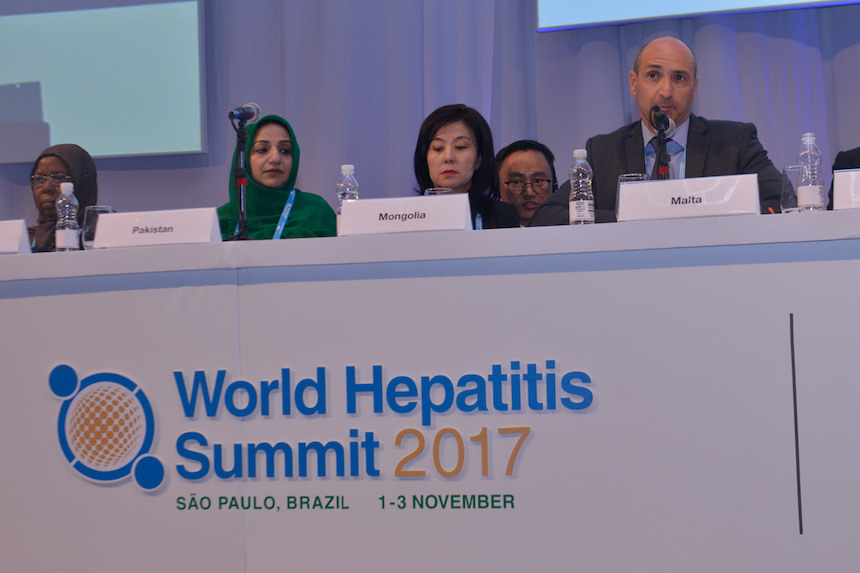 “We have seen a nearly 5-fold increase in the number of countries developing national plans to eliminate life-threatening viral hepatitis over the last 5 years,” says Dr Gottfried Hirnschall, Director of WHO’s Department of HIV and Global Hepatitis Programme. “These results bring hope that the elimination of hepatitis can and will become a reality.”

Hosted by the Government of Brazil, the World Hepatitis Summit 2017 is being co-organized by WHO and the World Hepatitis Alliance. The Summit aims to encourage more countries to take decisive action to tackle hepatitis, which still causes more than 1.3 million deaths every year and affects more than 325 million people.

“We cannot lose sight of the fact that last year 194 governments committed to eliminating viral hepatitis by 2030. For sure we are still a long way from this goal but that doesn’t mean it’s some unattainable dream. It’s eminently achievable. It just requires immediate action,” says Charles Gore, President of World Hepatitis Alliance. “The World Hepatitis Summit 2017 is all about how to turn WHO’s global strategy into concrete actions and inspire people to leave with a ‘can do’ attitude.”

“Brazil is honored to host the World Hepatitis Summit 2017 – and welcomes this extraordinary team of experts, researchers, managers and civil society representatives to discuss the global health problem posed by viral hepatitis,” says Dr Adele Schwartz Benzaken, Director of the Brazilian Ministry of Health’s Department of Surveillance, Prevention and Control of STIs, HIV/AIDS and Viral Hepatitis. “Brazil is committed to taking recent advances in its response to hepatitis forward – on the road to elimination.”

Progress in treatment and cure

Many countries are demonstrating strong political leadership, facilitating dramatic price reductions in hepatitis medicines, including through the use of generic medicines—which allow better access for more people within a short time.

Countries need to provide a full range of hepatitis prevention services that are accessible to different population groups, particularly those at greater risk.

Largely due to increases in the uptake of hepatitis B vaccine, hepatitis B infection rates in children under 5 fell to 1.3% in 2015, from 4.7% in the pre-vaccine era.

However, the delivery of other prevention services, such as birth-dose vaccination for hepatitis B, harm reduction services for people who inject drugs, and infection control in many health services, remains low. This has led to continuing rates of new infections, including 1.75 million new hepatitis C cases every year.

Innovation in many aspects of the hepatitis response must continue. New tools required include a functional cure for hepatitis B infection and the development of more effective point-of-care diagnostic tools for both hepatitis B and C.

“We cannot meet the ambitious hepatitis elimination targets without innovation in prevention interventions and approaches, and implementing them to scale,” said Dr Ren Minghui Assistant Director-General for Communicable Diseases, WHO. “The great successes of hepatitis B vaccination programmes in many countries need to be replicated and sustained globally in the context of moving forward to universal health coverage.”

The World Hepatitis Summit 2017 will be attended by over 900 delegates from more than 100 countries, including Ministers of Health, national programme managers, and representatives from organizations of people affected by viral hepatitis. The Summit will review progress and renew commitments by global partners to achieve the elimination of viral hepatitis by 2030 – a target reflected in WHO’s elimination strategy and the UN Sustainable Development Goals.

Study Shows How Memories Ripple Through the Brain