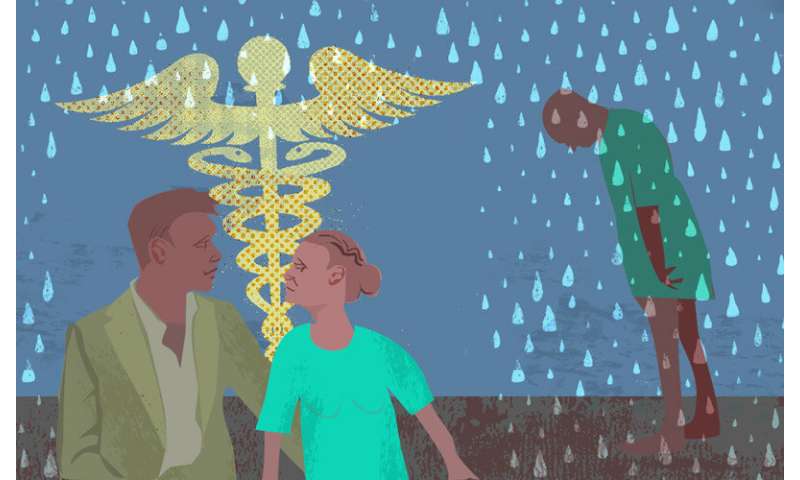 Unmarried patients with cancer are less likely to get potentially life-saving surgery or radiotherapy than their married counterparts, raising the concern that medical providers may be relying on stereotypes that discount sources of social support other than a current spouse.

That’s the conclusion reached by the University of Delaware’s Joan DelFattore, a professor emerita of English who combined her personal experience as an unmarried patient with her skills as a researcher to publish a peer-reviewed article in the latest issue of The New England Journal of Medicine.

Titled “Death by Stereotype? Cancer Treatment in Unmarried Patients,” the article examines 84 medical articles that draw on a massive National Cancer Institute database to show that patients are significantly less likely to receive surgery or radiotherapy if they are not currently married.

Although this disparity has been attributed in studies to such factors as patients’ treatment preferences or a weaker will to live among unmarried people, DelFattore found that those speculations are not only unsupported by data but actually conflict with extensive research findings. Rather, her article suggests that cultural stereotypes inappropriately influence the treatments recommended for unmarried patients with cancer.

The central issue for physicians is the social support that patients need, especially if their treatments require numerous healthcare visits or may cause debilitating side effects. But while unmarried people often have especially strong networks of friends and community ties, medical researchers tend to equate social support with having a spouse, DelFattore found.

“The statistics definitely show a connection between marital status and the treatment patients receive,” she said. “There are people getting sick and getting second-best treatment.”

Some patients–married as well as unmarried–certainly lack the social support necessary to handle aggressive treatment, “but that generalization can’t possibly apply to nearly half the adult population,” she said. According to the U.S. Census Bureau, 45% of U.S. adults are unmarried.

DelFattore is part of that population, and when she was diagnosed in 2011 with advanced gallbladder cancer, she relied on her network of friends, colleagues, neighbors and extended family to help her. As she recounts in the journal article, her surgeon at Memorial Sloan Kettering Cancer Center accepted her description of her friend-based support network without question.

At the time, she didn’t realize that his acceptance couldn’t be taken for granted, but when she went for post-surgery chemotherapy, the first doctor she saw asked about her marital status and continued to focus on that subject. Even after she tried to explain the support she had available, the oncologist recommended a milder course of treatment that DelFattore knew was not the most effective.

“He wouldn’t risk serious side effects [of the more aggressive treatment] with, as he put it, ‘someone in your situation,'” she writes. She changed doctors and was given the harsher, more effective chemotherapy by an oncologist who accepted that she had the necessary support.

DelFattore is concerned that doctors might rely on medical researchers who, in turn, are citing sociological and psychological studies that don’t say what the researchers assume they say.

“Even if medical researchers mean to recommend what’s best for patients, as they presumably do, their reliance on stereotypes about unmarried adults is misleading, especially when they misinterpret sociological and psychological studies that do not, in fact, support those stereotypes,” DelFattore said.

For example, she said, almost all authors in the 84 articles she reviewed equate marriage with social support, “but the psychological and sociological studies they cite to support that claim don’t even mention the words ‘marriage,’ ‘marital’ or ‘spouse,'” she said. Instead, those studies talk about social support as a complex web of connections that can’t be reduced to a single element.

Consistent with longstanding social stereotypes, DelFattore said, doctors may use the question about marital status as a kind of shorthand way to ask about social support. Once they hear the word “unmarried,” they may stop there.

DelFattore is quick to point out that she’s not the person who discovered the differences in treatment between married and unmarried patients. Based on her review of articles, it’s been known since at least 1987 that cancer patients with a current spouse are more likely to get surgery or radiotherapy than those who are divorced, separated, widowed or never married, she said.

“This is not shocking news,” she said of the disparity. “What’s shocking is that it’s been buried in the fine print of academic journals and footnotes for over 30 years.”

Now, she said, she hopes her journal article will raise awareness and spur additional research. She also hopes that, just as medical schools now teach about the dangers of unintentional racial and gender bias in treating patients, they’ll also start discussing marital status.

“I’m not writing about this and advocating for change out of anger or outrage,” she said. “It’s not about blame. It’s about asking people to examine their assumptions–in this case, with respect to potentially life-or-death decisions. Medicine has to evolve, not only in science and technology, but also with respect to an evolving society.”