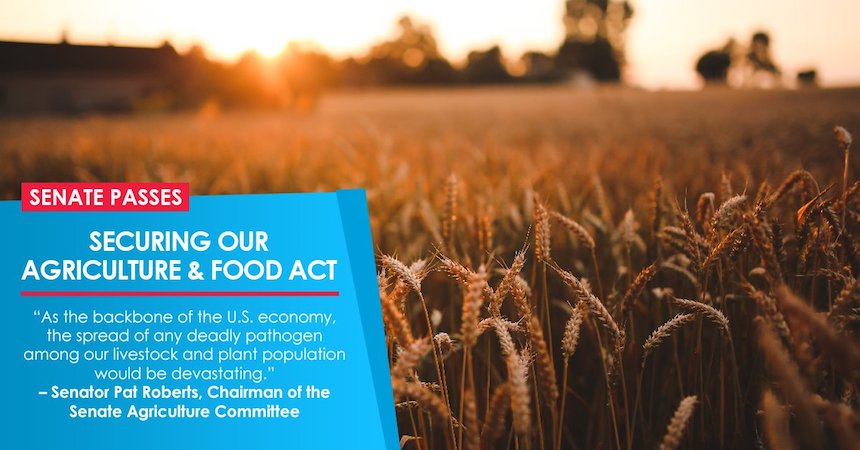 The United States faces complex national security challenges, among them agroterrorism, which poses serious threats to U.S. food, agriculture, and livestock industries. Experts say that it is imperative to have preparedness policies in place quickly to respond to events threatening U.S. agriculture or food production systems in order to protect the industries which have an impact on Americans on a daily basis.

The Securing our Agriculture and Food Act requires the secretary of Homeland Security (DHS), through the assistant secretary for Health Affairs, to lead the government’s efforts to secure the U.S. food, agriculture, and veterinary systems against terrorism and high-risk events. The bill also authorizes the secretary to collaborate with other agencies to ensure food, agriculture, and animal and human health sectors receive attention and are integrated into the DHS’s domestic preparedness policy initiatives.

The U.S. Senate on Thursday approved the Securing our Agriculture and Food Act, which was introduced by U.S. Sens. Pat Roberts (R-KS), Chairman of the Senate Agriculture Committee, and Claire McCaskill (D-MO), Ranking Member of the Senate Homeland Security Committee, in the Senate and U.S. Reps. David Young (R-IA), Donald Payne, Jr. (D-NJ), and Dan Donovan (R-NY) in the House.

“An attack on our nation’s food supply would cause irreparable damage,” said Roberts, Chairman of the Senate Agriculture Committee. “This legislation reiterates the important and necessary role of the DHS in the agroterrorism space. As former chairman of the Senate Intelligence Committee, I understand the unique threat our farmers and ranchers face. As the backbone of the U.S. economy, the spread of any deadly pathogen among our livestock and plant population would be devastating. I look forward to continuing to work with DHS and USDA, which play equally important roles, in protecting our homeland’s food supply.”

“A terrorist attack on our agricultural industry or food supply could put countless lives at risk and result in huge economic losses for our state’s farmers and ranchers,” said McCaskill, the top-ranking Democrat on the Homeland Security and Governmental Affairs Committee. “Missourians rightly expect me to work with my Republican colleagues and President Trump on issues of national security and I’m going to continue to do that no matter what partisans on both sides might say.”

“Our nation’s enemies are intent on attacking us by exploiting our resources and vulnerabilities, including our food supply,” said Congressman Donovan, Chairman of the House Subcommittee on Emergency Preparedness, Response, and Communications.“Threats to U.S food, agriculture, and livestock industries could devastate our food system, impacting millions of Americans, as well as our economy. This bill is essential to enhancing agro-terrorism preparedness and emergency response measures, and I’m proud to have worked with my colleagues on both sides of the aisle to get it passed. I look forward to having President Trump sign this important legislation into law.”

“I am pleased to reintroduce legislation that will protect our nation’s food system from terrorist threats,” said Congressman Payne, Jr., Ranking Member of the House Subcommittee on Emergency Preparedness, Response, and Communications. “Any attack on our food supply could have devastating consequences on our economy and our communities, which is why we must take immediate action to mitigate against potential threats. Our bill makes sure that we address critical security vulnerabilities before they can be exploited.”

“I introduced this legislation following the avian influenza outbreak of 2015 which wiped out millions of layer hens, turkeys, and backyard flocks in Iowa,” said Congressman Young. “Response efforts revealed problematic breaks in the federal government’s ability to communicate with the people and react quickly to large-scale animal disease outbreaks. This disaster also raised concerns among farmers and producers about whether our nation would be able to quickly and effectively share information and respond to agroterrorism threats and bio-attacks, ultimately an attack against the safety and reliability of food supplies consumers rely on. I am pleased both the U.S. House of Representatives and U.S. Senate have taken the important steps towards advancing these common sense measures critical to our national security and food safety, for our children and families in Iowa and across the nation.”

After House consideration, the bill then goes to the president’s desk for signature.