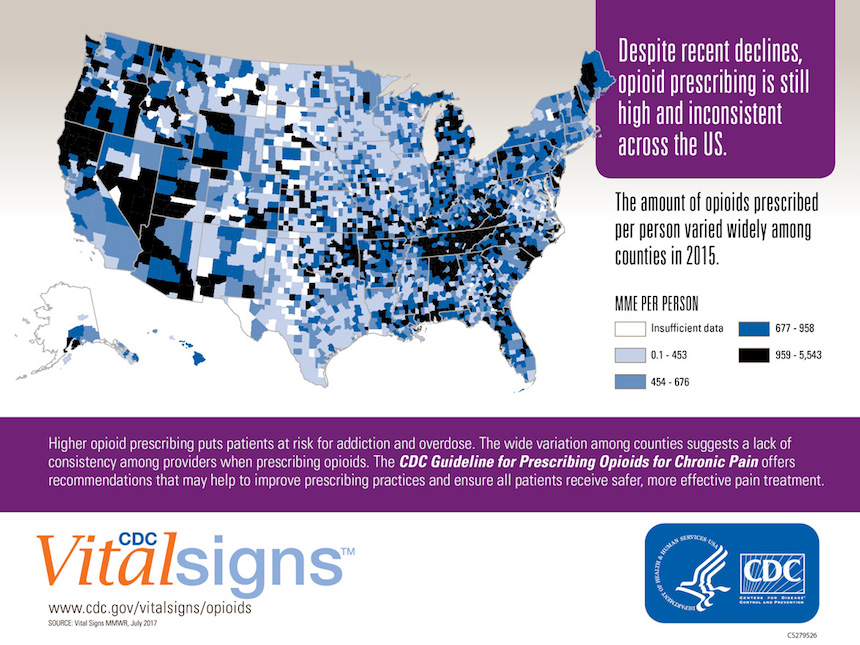 The amount of opioids prescribed in the United States peaked in 2010 and then decreased each year through 2015, but remains at high levels and varies from county to county in the U.S., according to the latest Vital Signs report by the Centers for Disease Control and Prevention (CDC).

“The amount of opioids prescribed in the U.S. is still too high, with too many opioid prescriptions for too many days at too high a dosage,” said Anne Schuchat, M.D., acting director of the Centers for Disease Control and Prevention. “Healthcare providers have an important role in offering safer and more effective pain management while reducing risks of opioid addiction and overdose.”

For this Vital Signs report, CDC analyzed retail prescription data from QuintilesIMS to assess opioid prescribing in the United States from 2006 to 2015, including rates, amounts, dosages, and durations prescribed. CDC examined county-level prescribing patterns for the years 2010 and 2015.

County-level factors associated with higher amounts of opioids prescribed include:

“While some variation in opioid prescribing is expected and linked to factors such as the prevalence of painful conditions, differences in these characteristics explain only a fraction of the wide variation in opioid prescribing across the United States,” said Deborah Dowell, M.D., M.P.H., chief medical officer in the Division of Unintentional Injury Prevention at CDC’s National Center for Injury Prevention and Control. “This variation highlights the need for healthcare providers to consider evidence-based guidance when prescribing opioids.”