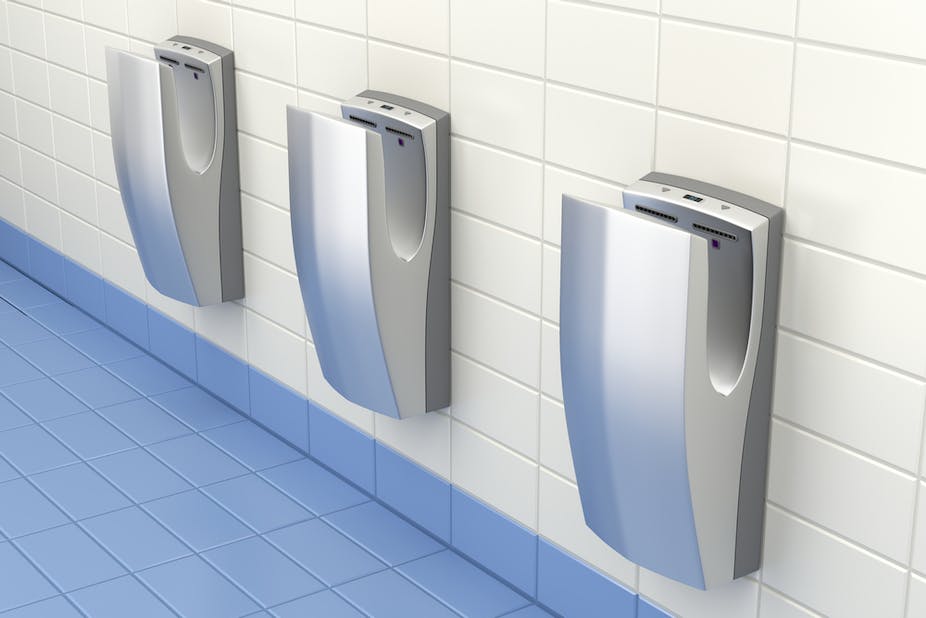 Jet-air hand dryers in hospital toilets spread more germs than disposable paper towels and should not be used, say researchers.

Writing in the Journal of Hospital Infection, they argue that the official guidance about how to prevent bacterial contamination in hospital buildings needs to be strengthened.

At the moment, the official U.K. Department of Health guidance says air dryers can be placed in toilets in the public areas of a hospital but not in clinical areas: not because of the risks they pose for cross contamination but because they are noisy.

Mark Wilcox, Professor of Medical Microbiology at the University of Leeds who supervised the international study, said the guidance needs to focus on the infection risks given new evidence.

The new study looked at bacterial spread in a real world setting – in two toilets in each of three hospitals, which were in the UK, France and Italy. Each of the toilets had paper towel dispensers and jet-air dryers, but only one of these was in use on any given day.

Professor Wilcox said: “The problem starts because some people do not wash their hands properly.

“When people use a jet-air dryer, the microbes get blown off and spread around the toilet room.

“In effect, the dryer creates an aerosol that contaminates the toilet room, including the dryer itself and potentially the sinks, floor and other surfaces, depending on the dryer design and where it is sited. If people touch those surfaces, they risk becoming contaminated by bacteria or viruses.

“Jet-air dryers often rely on no-touch technology to initiate hand drying. However, paper towels absorb the water and microbes left on the hands and if they are disposed of properly, there is less potential for cross-contamination.”

The study, led by researchers from the University of Leeds and Leeds Teaching Hospitals Trust, was the largest of its type to investigate whether the way people dry their hands has an impact on the spread of bacteria.

This research follows a previous laboratory-based study led by the same team, which found that jet-air dryers were much worse than paper towels or traditional warm air hand dryers when it came to spreading germs.

The hospitals used in the study were the Leeds General Infirmary in Yorkshire, the hospital of Saint Antoine (Assistance Publique-Hôpitaux de Paris) in France, and the Hospital of Udine in Italy.

On each day, over 12 weeks, levels of bacterial contamination in the toilets were measured, allowing comparisons to be made when either paper towels or jet-air dryers were in use. Samples were taken from the floors, air and surfaces in each of the toilets.

The main target bacteria were:

Across the three hospitals, bacterial counts were significantly higher in the toilets on the days that jet-air dryers were in use.

In Leeds and Paris, at least five times more bacteria were recovered from the floors when jet-air dryers were in use, compared with paper towels.

In Leeds, Staphylococcus aureus (including MRSA) was found three times more often and in higher amounts on the surface of the jet-air dryers compared with the paper towel dispensers. Significantly more enterococci and multidrug resistant bacteria were recovered from either the floors or dust of toilets when the jet-air dryers rather than paper towels were in use.

In Italy, the researchers found significantly fewer bacteria on the surface of paper towel dispensers compared with the jet-air dryers, although no significant difference on the floors.

Professor Wilcox said: “We found multiple examples of greater bacterial contamination on surfaces, including by faecal and antibiotic-resistant bacteria, when jet-air dryers rather than paper towels were in use. Choice of hand drying method affects how likely microbes can spread, and so possibly the risk of infection.”