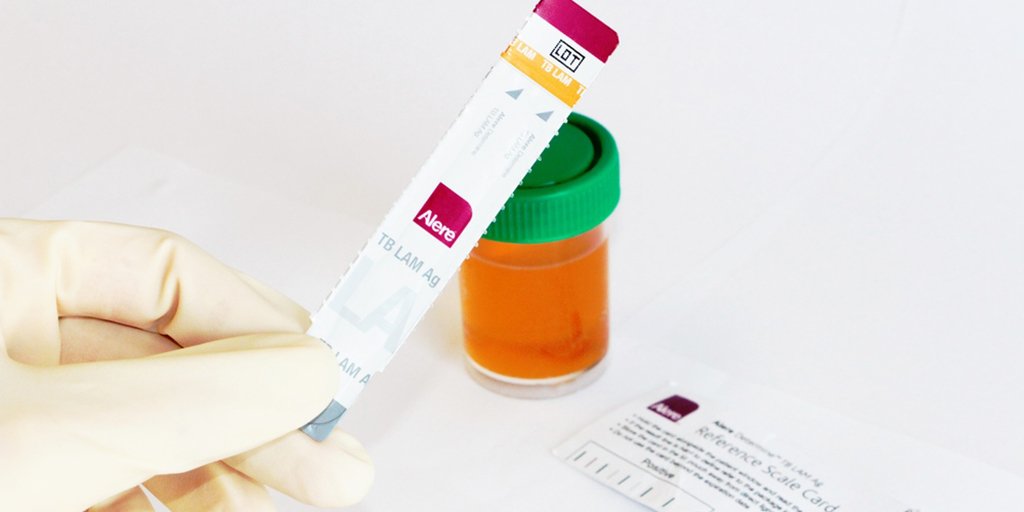 Tuberculosis (TB) causes more deaths in people living with HIV than any other disease, with more than 300,000 deaths in 2017. When detected, early TB can be treated effectively; however, people with advanced HIV are at high risk of death, often without knowing they have TB. Diagnosis of TB in HIV-positive people is often complicated because they may not present with typical symptoms, and sputum-based test are not always effective because many have disease outside the lungs and may not be able to produce sputum.

The lateral flow urine lipoarabinomannan (LAM) assay is a rapid test (similar to a pregnancy test), recommended by the World Health Organization (WHO) to help detect active tuberculosis in HIV-positive people with severe disease. There is currently only one commercially available test of this kind, Alere Determine™ TB LAM Ag assay (AlereLAM), and new tests are being developed. The test is used as an add-on to clinical judgement and not as a replacement or triage test. The test is simple, non-invasive, and inexpensive. It is currently the only point-of-care test for tuberculosis. Although the WHO has recommended the use of lateral flow urine LAM since 2015, the test has not been widely implemented.

An updated Cochrane Review was carried out to inform a WHO Guideline Development process to update recommendations on the use of the test. Taking into account the results of 15 studies, the aim was to assess the diagnostic accuracy of lateral flow urine LAM in HIV-positive people. Based on this evidence and other factors, the WHO guideline panel was interested in answering the question: is there sufficient evidence to broaden recommendations on the use of lateral flow urine LAM?

The authors, from the University of Southern Denmark, Johns Hopkins, McGill University, and Liverpool School of Tropical Medicine, found that the sensitivity, or proportion of TB-positive individuals that are correctly identified, and specificity, or proportion of TB-negative individuals that are correctly identified, were 42% and 91% in HIV-positive people with TB symptoms and 35% and 95% in HIV-positive people irrespective of symptoms. These findings were similar to those in the previous published review version. They found that the test may be of particular value in diagnosing TB in patients with increased disease severity or with low CD4 cell count, and those requiring hospitalization.

The test was found to have lower sensitivity to detect TB in HIV-positive adults than the internationally proposed minimum target of 65% for non-sputum-based TB tests. Lead author Stephanie Bjerrum said: “The sensitivity suggests that if the test were to be used alone, it would miss more than half of TB cases. However, of importance, two randomised controlled trials found reduced mortality and improvement in other patient health outcomes when the test was used in hospitalized HIV-positive adults.”

The team noted that there were few studies in HIV-positive children and that this represents an important gap in understanding of the test. The updated WHO Guidelines on the use of lateral flow urine LAM assay are expected in October 2019.