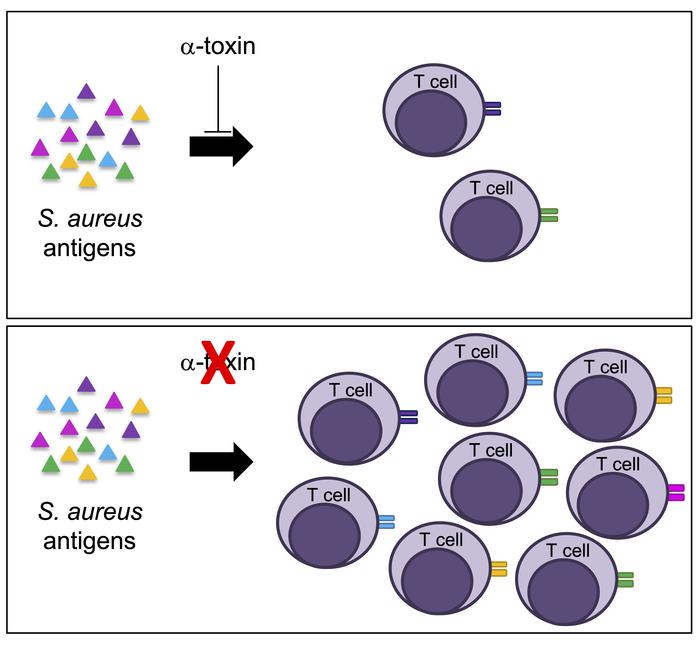 Staph bacteria, the leading cause of potentially dangerous skin infections, are most feared for the drug-resistant strains that have become a serious threat to public health. Attempts to develop a vaccine against methicillin-resistant Staphylococcus aureus (MRSA) have failed to outsmart the superbug’s ubiquity and adaptability to antibiotics.

Now, a study from Washington University School of Medicine in St. Louis may help explain why previous attempts to develop a staph vaccine have failed, while also suggesting a new approach to vaccine design. This approach focuses on activating an untapped set of immune cells, as well as immunizing against staph in utero or within the first few days after birth.

The research, in mice, found that T cells — one of the body’s major types of highly specific immune cells — play a critical role in protecting against staph bacteria. Most vaccines rely solely on stimulating the other main type of immune cells, the B cells, which produce antibodies to attack disease-causing microorganisms such as bacteria.

The findings are published online December 24 in the Journal of Clinical Investigation.

“Across the globe, staph infections have become a pervasive health threat because of increasing antibiotic resistance,” said senior author Juliane Bubeck Wardenburg, MD, PhD, director of the university’s Division of Pediatric Critical Care. “Despite the medical community’s best efforts, the superbug has shown a consistent ability to elude treatment. Our findings indicate that a robust T cell response is absolutely essential for protection against staph infections.”

Highly contagious, staph survives and thrives on human skin and can be spread through skin-to-skin contact or exposure via contaminated surfaces. Generally, the bacteria live harmlessly and invisibly in about one-third of the population. From their residence on the skin, the bacteria can cause red, pus-filled sores. Ever persistent, the superbug will deliver recurrent infections in about half of its victims.

Staph strains can enter the bloodstream, bones or organs and lead to pneumonia, severe organ damage and other serious complications in hundreds of thousands of people each year. More than 10,000 people die in the U.S. from drug-resistant staph infections annually.

“The focus in the vaccine field for Staphylococcus aureus during the past 20 years has been on generating antibody responses, not on specific T cell responses,” Bubeck Wardenburg said. “This new approach shows promise.”

For nearly 15 years, Bubeck Wardenburg has studied a single toxin — called alpha-toxin — made by staph. This toxin plays a role in tissue damage in multiple forms of infection. “An important thing about the alpha-toxin is that it is found in all staph strains, meaning those that are and are not antibiotic-resistant,” she said. “Understanding this allowed us to devise studies in mice that examined the effect of alpha-toxin on the immune response in minor skin infections as well as in more serious infections that spread in the bloodstream.”

The researchers found that the immune cells did not protect mice that had minor staph infections on their skin. However, mice that were exposed to life-threatening staph infections in the bloodstream did develop protection. “We discovered a robust T cell response targeting staph in the bloodstream,” Bubeck Wardenburg said. “By contrast, T cells were diminished in skin infections as a result of the toxin. Because skin infection is very common, we think that staph uses alpha-toxin to prevent the body from activating a T cell response that affords protection against the bacteria.”

In terms of the big picture, Bubeck Wardenburg said blocking the toxin in skin infections may yield a healthy T cell response.

Further, protecting the T cell response from the time of birth may reprogram the bacteria’s overall effect on the immune system. “This bug is deliberate and acts in a sinister way early on,” she said. “The bug appears to be using the toxin to shape the T cell response in a way that’s favorable for the bug but not for humans.”

Previous vaccine development efforts have focused on adults. However, Bubeck Wardenburg said, a vaccine may be more likely to succeed if administered before infants first encounter staph. Therefore, immunization should happen before initial exposure to staph, to block the toxin and generate a vigorous T cell response.

“We envision two strategies,” Bubeck Wardenburg said. “One is immunizing pregnant women so they can transfer antibodies that protect infants against the toxin at birth. The second involves immunizing infants within a day or two after birth. Neither of these strategies has been considered for staph vaccines to date.”

Many Younger Patients with Stomach Cancer Have a Distinct Disease, Mayo Research Discovers