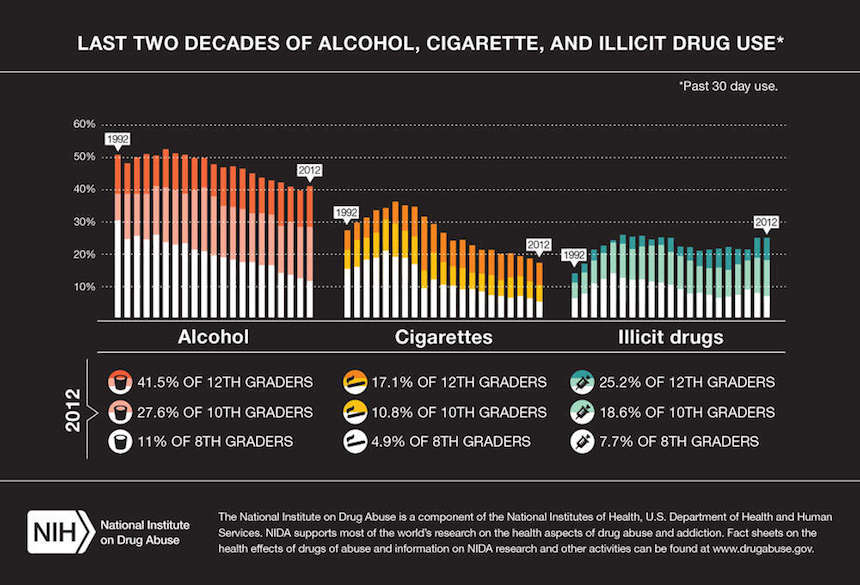 Nearly 1 in 3 students in 12th grade report past year use of some kind of vaping device, raising concerns about the impact on their health. What they say is in the device, however, ranges from nicotine, to marijuana, to “just flavoring.” The survey also suggests that use of hookahs and regular cigarettes is declining. These findings come from the 2017 Monitoring the Future (MTF) survey of eighth, 10th and 12th graders in schools nationwide, reported today by the director of the National Institute on Drug Abuse (NIDA), part of the National Institutes of Health, along with scientists from the University of Michigan, who conduct the annual research. The survey asks teens about “any vaping” to measure their use of electronic vaporizers. It is important to note that some research suggests that many teens do not actually know what is in the device they are using, and even if they read the label, not all labeling is consistent or accurate.

The survey shows that 27.8 percent of high school seniors reported “vaping” in the year prior to the survey, which was taken in the beginning of 2017. When asked what they thought was in the mist they inhaled the last time they used the vaping device, 51.8 percent of 12th graders said, “just flavoring,” 32.8 percent said “nicotine,” and 11.1 percent said “marijuana” or “hash oil.” The survey also asks about vaping with specific substances during the past month. Among 12th graders, more than 1 in 10 say they use nicotine, and about 1 in 20 report using marijuana in the device.

“We are especially concerned because the survey shows that some of the teens using these devices are first-time nicotine users,” said Nora D. Volkow, M.D., director of NIDA. “Recent research suggests that some of them could move on to regular cigarette smoking, so it is critical that we intervene with evidence-based efforts to prevent youth from using these products.”

The survey also indicates that while opioid overdose rates remain high among adults, teens are misusing opioid pain medications less frequently than a decade ago, and are at historic lows with some of the commonly used pain medications. For example, past year misuse of the opioid pain reliever Vicodin among high school seniors dropped to its lowest point since the survey began measuring it in 2002, and it is now at just 2 percent. This compares to last year’s 2.9 percent, and reflects a long-term decline from a peak of 10.5 percent in 2003.

In overall pain medication misuse, described as “narcotics other than heroin” in the survey, past year misuse has dropped significantly among 12th graders since its survey peak in 2004 — to 4.2 percent from 9.5 percent. Interestingly, teens also think these drugs are not as easy to get as they used to be. Only 35.8 percent of 12th graders said they were easily available in the 2017 survey, compared to more than 54 percent in 2010.

“The decline in both the misuse and perceived availability of opioid medications may reflect recent public health initiatives to discourage opioid misuse to address this crisis,” added Volkow. “However, with each new class of teens entering the challenging years of middle and high school, we must remain vigilant in our prevention efforts targeting young people, the adults who nurture and influence them, and the health care providers who treat them.”

The 2017 survey also confirms the recent trend that daily marijuana use has become as, or more, popular than daily cigarette smoking among teens, representing a dramatic flip in use between these two drugs since the survey began in 1975. In the past decade, daily marijuana use among 12th graders has remained relatively consistent, but daily cigarette smoking has dropped.

When combining responses in all three grades, data suggest past year marijuana use is up slightly to 23.9 percent, from 22.6 percent last year, but similar to 2015 rates (23.7 percent). However, because overall marijuana rates remain stable, researchers continue to carefully monitor any potential trends as they emerge. The survey indicates that significantly fewer teens now disapprove of regular marijuana use, with 64.7 percent of 12th graders voicing disapproval, compared to 68.5 percent last year. The survey reports that high school seniors in states with medical marijuana laws are more likely to have vaped marijuana and consumed marijuana edibles than their counterparts without such laws. For example, survey data suggests that 16.7 percent of 12th graders in states with medical marijuana laws report consuming edibles, compared to 8.3 percent in states without such laws.

Inhalant use — the one category of drug use that is typically higher among younger students — is back up to 2015 levels among eighth graders, measured at 4.7 percent, compared to 3.8 percent in 2016. However, rates are still low, showing a significant decline from peak rates in 1995, when 12.8 percent of eighth graders reported using an inhalant to get high in the past year.

Overall, illicit drug use other than marijuana and inhalants, remains the lowest in the history of the survey in all three grades, with 13.3 percent of 12th graders reporting past year use, compared to 9.4 percent of 10th graders and 5.8 percent of eighth graders. These successes underscore the importance of continuing evidence-based prevention programs targeting children approaching their teenage years.

After years of steady decline, binge drinking appears to have leveled off this year, and public health researchers will be closely watching these behaviors in the coming years. However, rates are still down significantly from the survey’s peak years. Binge drinking is defined as having five or more drinks in a row sometime in the last two weeks.

“While binge drinking among eighth, 10th, and 12th grade students remains well below the levels seen a decade ago, the downward trend in binge drinking appears to have slowed somewhat in recent years,” said George F. Koob, Ph.D., director of the National Institute on Alcohol Abuse and Alcoholism. “This may signal a need for more emphasis on alcohol prevention strategies in this age group.”

Monitoring the Future has been conducted by researchers at the Institute for Social Research at the University of Michigan at Ann Arbor since 1975, expanding the study periodically to include additional grades and topic areas. It is the only large-scale federal government survey that releases findings the same year the data is collected.

Other highlights from the 2017 survey

The survey also measures attitudes about drug use, including perceived availability and harmfulness, as well as disapproval of specific drugs. Generally, attitudes grow more favorable towards drug use as teens get older.

Overall, 43,703 students from 360 public and private schools participated in this year’s MTF survey. Since 1975, the survey has measured how teens report their drug, alcohol, and cigarette use and related attitudes in 12th graders nationwide. Eighth and 10th graders were added to the survey in 1991. Survey participants generally report their drug use behaviors across three time periods: lifetime, past year, and past month. Questions are also asked about daily cigarette and marijuana use. NIDA has provided funding for the survey since its inception to a team of investigators at the University of Michigan at Ann Arbor, currently led by Dr. Richard Miech.

To Sleep or Not: Researchers Explore Complex Genetic Network Behind Sleep Duration