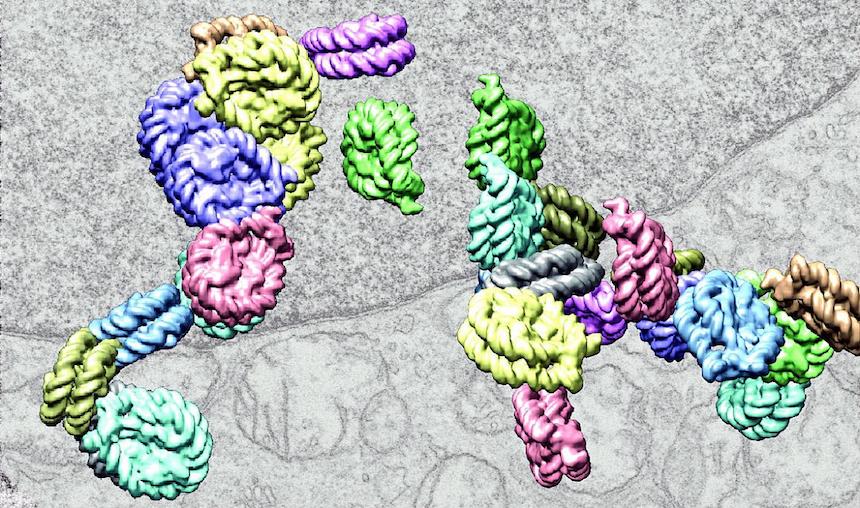 How can six and half feet of DNA be folded into the tiny nucleus of a cell?  Researchers funded by the National Institutes of Health have developed a new imaging method that visualizes a very different DNA structure, featuring small folds of DNA in close proximity. The study reveals that the DNA-protein structure, known as chromatin, is a much more diverse and flexible chain than previously thought. This provides exciting new insights into how chromatin directs a nimbler interaction between different genes to regulate gene expression, and provides a mechanism for chemical modifications of DNA to be maintained as cells divide.  The results will be featured in the July 28 issue of Science.

For decades, experiments suggested a hierarchical folding model in which DNA segments spooled around 11 nanometer-sized protein particles, assembled into rigid fibers that folded into larger and larger loops to form chromosomes. However, that model was based on structures of chromatin in vitro after harsh chemical extraction of cellular components.

Now, researchers at the Salk Institute, La Jolla, California, funded by the NIH Common Fund, have developed an electron microscopy technique called ChromEMT that enables the 3D structure and packing of DNA to be visualized inside the cell nucleus of intact cells. Contrary to the longstanding text book models, DNA forms flexible chromatin chains that have fluctuating diameters between five and 24 nanometers that collapse and pack together in a wide range of configurations and concentrations.

The newly observed and diverse array of structures provides for a more flexible human genome that can bend at varying lengths and rapidly collapse into chromosomes at cell division. It explains how variations in DNA sequences and interactions could result in different structures that exquisitely fine tune the activity and expression of genes.

“This is groundbreaking work that will change the genetics and biochemistry textbooks,” remarks Roderic I. Pettigrew, Ph.D., M.D., director of the National Institute of Biomedical Imaging and Bioengineering (NIBIB), which administered the grant. “It’s an outstanding example of how constantly improving imaging techniques continue to show the true structure of everything from neuronal connections in the brain to the correct visualization of gene expression in the cell. It reveals how these complex biological structures are able to perform the myriad intricate and elaborate functions of the human body.”

“We identified a fluorescent small molecule that binds specifically to DNA and can be visualized using advanced new 3D imaging methods with the electron microscope,” explained Clodagh O’Shea, Ph.D., the leader of the Salk group, associate professor and Howard Hughes Medical Institute Faculty Scholar. “The system enables individual DNA particles, chains and chromosomes to be visualized in 3D in a live, single cell. Thus, we are able to see the fine structure and interactions of DNA and chromatin in the nucleus of intact cells.”

Dr. O’Shea’s team included collaborators from the University of California, San Diego, and the National Center for Microscopy and Imaging Research, San Diego.

The researchers believe their discovery dovetails with their research on how tumor viruses and cancer mutations change a cell’s DNA structure and organization to cause uncontrolled cell growth. It could enable the design of new drugs that manipulate the structure and organization of DNA to make a tumor cell ‘remember’ how to be normal again or impart new functions that improve the human condition.

“To see the human genome in in all of its 3D glory is the dream of every biologist. Now, we are working to design probes that will allow us to also see the proteins that bind to the DNA to turn genes on and off. We will then be able to view an actual gene in action,” concluded O’Shea.