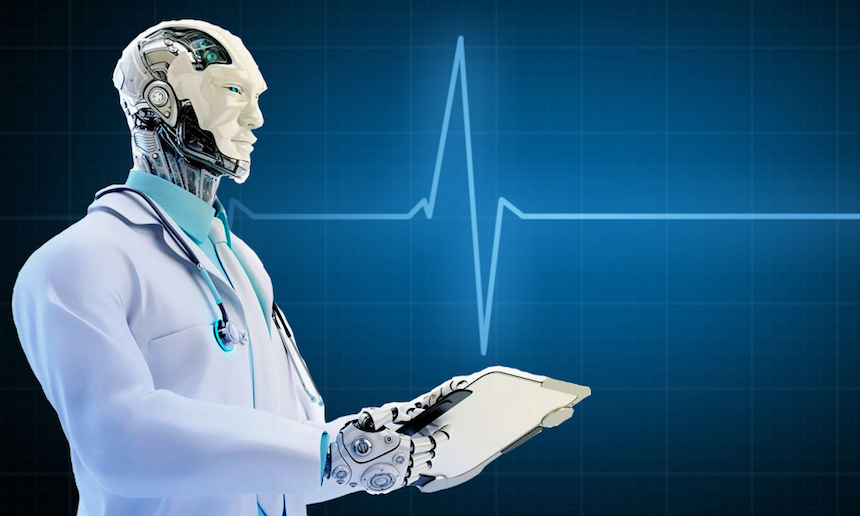 Replacing the doctor with an intelligent medical robot is a recurring theme in science fiction, but the idea of individualised medical advice from digital assistants like Alexa or Siri, supported by self-surveillance smartphone data, no longer seems implausible. A scenario in which medical information, gathered at the point of care, is analysed using sophisticated machine algorithms to provide real-time actionable analytics seems to be within touching distance. The creation of data-driven predictions underpins personalised medicine and precision public health. Medical practice has so far been largely unchanged by the digital revolution that has disrupted so many other industries, but perhaps artificial intelligence (AI) will provide the improvements in medical care and research promised for so long.

At its inception in the 1950s, the central goal of AI research was to produce a system with general intelligence capable of passing the so-called Turing test, the display of intelligent behaviour indistinguishable from that of a human being. Through the past 60 years, the field has experienced several cycles of excitement and disillusionment with seemingly little progress, but since 2010 substantial success has been made in deep learning, producing systems able to learn without having to be explicitly programmed, by building a model from sample inputs. The explosion of deep learning, a form of machine learning in which multiple layers of nodes exist between the input and output layers, simulating layers of neurons in a so-called artificial neural network, underpins many of the notable recent advances in speech recognition, image classification, text translation, and self-driving vehicles.

Deep learning has produced AI systems capable of outperforming human beings at specific tasks—eg, high-profile successes in the games Go and Jeopardy. The sudden success with this technique, which depends on the analysis of a very large amount of data, has been facilitated by advances in computing processing power, relatively cheap digital storage, and a flood of available digital data. Images are particularly amenable to deep learning techniques. In 2017, successful use of deep neural networks was reported for the analysis of skin cancer images with greater accuracy than a dermatologist and the diagnosis of diabetic retinopathy from retinal images. The inherent requirement for large-scale, high-quality, well structured data might ultimately limit the areas in which AI can bring benefits to health care. Although some providers have moved to electronic health records, information contained is often produced for purposes other than research, for example, reimbursement or audit, and therefore could be confounded, inaccurate, or lack the clinical resolution to yield meaningful insights. Large amounts of big health data are still recorded as text and extracting clinically significant information using natural language processing methods is a challenging task.

Despite the excitement around these sophisticated AI technologies, very few are in clinical use. Translating technical success to meaningful clinical impact is the next great challenge. This step requires development of a framework for assessing and comparing the performance of AI technology, which is made particularly difficult by the layers of abstraction within the deep learning systems that can render them a black box. 2017 saw noticeable setbacks for two of the largest commercial companies operating in this space, as IBM Watson’s project with the MD Anderson Cancer Centre was halted after 4 years of development and Google DeepMind’s partnership with Royal Free London NHS Foundation trust came under fire for inappropriate sharing of confidential patient data. These events illustrate the very real challenges of the ethical and legal framework for data sharing, interoperability of systems, ownership of software produced from such partnerships, and the legal framework for clinical responsibility when errors occur using these systems.

2017 has marked a step change for AI in health care. Demonstrable successes with deep learning in other industries have awoken clinical interest. The resulting partnerships between clinicians and data scientists, supported by growing strength of clinical informatics, are beginning to yield positive results. With this change, the skills required to understand the informatics of large datasets, and the insights that can be drawn from them, have become an essential pillar of clinical practice, alongside evidence-based medicine. There is no doubt that AI in health care remains overhyped and at risk of commercial exploitation, but from the melee, quality collaborative research is emerging. AI requires thorough and systematic evaluation prior to integration in routine clinical care but, like other disruptive technologies in the past, the potential for impact should not be underestimated.

Nine Out of Ten Children in Bangladesh Exposed to Secondhand Smoke